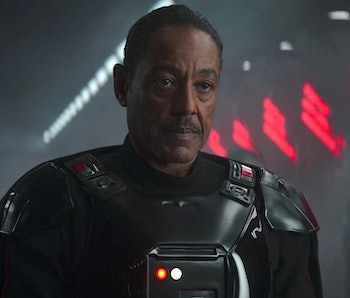 Star Wars may be set in a galaxy far, far away, but there's always a hint of realism to the galaxy's storytelling. The "science" part of science fiction shines in this franchise, even in the smallest details. For example, the map Mando pulls from the Imperial terminal on Morak during The Mandalorian Chapter 15 is an actual map of our real Milky Way galaxy. A handful of fans have taken it upon themselves to decode it to find out Moff Gideon's location — and the answer could have huge implications.

Here's what those online sleuths uncovered, and what it could mean for the Mandalorian Season 2 finale and Star Wars more broadly.

Speculation about Moff Gideon's location began with the popular Star Wars Theory YouTube channel, which overlaid the screenshot from Chapter 15 with a canon map of the galaxy. From this, the YouTuber estimated the red triangle from the terminal screenshot was near Nar Shaddaa, otherwise known as the Smuggler's Moon.

The final confrontation of this season happening on Nar Shaddaa would be huge news to Star Wars Legends fans, since Nar Shaddaa is basically the Coruscant of the Hutts. It was completely overpopulated and polluted and full of grim cityscapes. With most of the scenery of Mandalorian Season 2 consisting of deserts and sparsely populated planets, this would be the perfect bookend to the opening episode's grim fighting pits.

However, it's not the only plausible answer for Moff Gideon's location that online detectives have found. YouTuber EckhartsLadder also took a crack at overlaying maps onto the screenshot, this time using a canon map from The Essential Atlas. He used a screenshot from Chapter 10, "The Passenger" to figure out Tatooine's location, then overlaid that onto the map and the screenshot. The result, unfortunately, was not Nar Shaddaa, but another intriguing planet we've seen quite recently — Pasaana.

A final confrontation on Pasaana could open the door to the appearance of a certain beloved Jedi. Rise of Skywalker revealed that after the events of the original trilogy, Luke Skywalker went to Pasaana to track down Sith assassin Ochi. It's unclear exactly when this occurred, but it could very well be when Moff Gideon arrives with Grogu. If Luke heard his call, he wouldn't even have to travel to come to the young padawan's aid.

That theory is exciting but still a bit far-fetched, considering the logistical difficulties of a de-aged Mark Hamill making a cameo (is Sebastian Stan available?), but there's yet a third theory. Redditor NairdSW posted images of an attempt to find the real, true location using all the aforementioned maps plus another screenshot from Chapter 10 showing the route from Tatooine to Trask Mando and Frog Lady took over the course of Episodes 2 and 3.

The result is close to Pasaana, sure, but the red triangle indicating the Imperial Cruiser wasn't directly lined up with any planet. Moff Gideon and Grogu are still en route. The latest theory is that Moff Gideon is traveling to Kamino, a planet that infamously went "missing" during Obi-Wan's detective work into the clone army in Attack of the Clones.

Considering how Attack of the Clones has had a major influence over the rest of this season, with the return of Boba Fett and the use of a seismic charge, a visit to the planet it introduced would be fitting, and with Temuera Morrison on board, any clones remaining there would be easy to portray.

Even if some maps seen in Star Wars are more accurate than others, all three of these options would provide an exciting canvas for an epic showdown with Grogu's fate in the balance, whether it's in a cityscape, the deserts of Pasaana, or the mysterious waterscapes of Kamino.