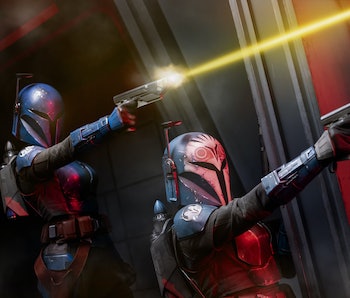 One of the great mysteries of The Mandalorian is what happened to Din Djarin’s home planet prior to the events of the show. In Season 1, Mando mentioned that all of his people were dead, but now we know that isn’t the case. While the Mandalore never appears in the original films, we know that the Empire took control of the planet from The Clone Wars. A fascinating new theory expands on what really happened there, and how it. could involve an iconic Star Wars weapon.

The Clone Wars' account of the Siege of Mandalore, which was (at least in part) instigated by Darth Maul’s takeover of the Death Watch, a group opposed to the Mandalorians’ stance against violence. Darth Maul’s actions ultimately led to the arrival of the Empire’s army, leaving the planet in disarray and under the government’s control.

The Mandalorian then confirmed the Great Purge occurred thereafter, an event that saw the Empire nearly annihilate the Mandalorian people. In Season 2’s third episode, Din Djarin’s search for other Mandalorians is halted after crossing paths with Bo-Katan Kryze, Koska Reeves, and Axe Woves, confirming that Mandalorians still existed. Bo-Katan reveals that she’s attempting to locate the darksaber and reclaim Mandalore from the Empire. Mando’s response to her crusade is rather surprising.

“That planet is cursed,” he says. “Anyone who goes there dies. Once the Empire knew they couldn't control it they made sure no one else could either.”

Reddit user liam1463 surmises that the Empire, knowing they couldn’t defeat the Mandalorians, used the Death Star in an attempt to destroy the planet. We can assume that Mandalore is still in orbit, but the theory points to at least the partial destruction of the planet.

The theory would certainly explain why Din Djarin previously believed the Mandalorians to be dead. In Season 1, Paz Vizla said that Mandalore was shattered by the Empire. Who’s to say he didn’t mean that literally? We also know how the Empire leaves nothing but devastation in its wake, so it makes sense that the Death Star may have been the final nail in the coffin for Mandalore.

It’s possible that the Mandalorians’ defense tactics prevented the Empire from blasting the planet to smithereens, leaving at least most or half of it intact and still habitable. Bo-Katan’s potential retrieval of the darksaber, a weapon belonging to her people, would mark a triumphant return to Mandalore and a fresh start for its citizens.

The Inverse Analysis — If true, the theory would combine information we already have about Mandalore and expand on it. The only issue is the timeline of events. If the Empire did attempt to blow up the planet, it would have to have happened prior to or during A New Hope, when the Empire was at its most powerful and the Siege of Mandalore was already over. Either way, the theory is sound.