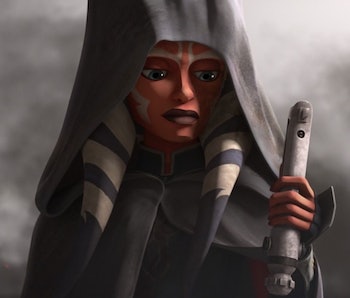 The Mandalorian is bringing the world of Star Wars animation into live-action. In the third episode of Season 2, The Clone Wars’ Bo-Katan Kryze made the jump to The Mandalorian, making the crossover official. Before she and Din Djarin parted ways, Bo-Katan revealed where Mando could find Ahsoka Tano, the famed Jedi Padawan. However, Ahsoka’s highly anticipated arrival could also bring back another missing Star Wars character.

Spoilers ahead for The Mandalorian Season 2 and Star Wars Rebels.

Throughout Season 2 of The Mandalorian, Din Djarin has been hunting for others of his kind, who might be able to lead him to the Jedi. Having found Bo-Katan and her Nite Owls in “Chapter 11: The Heiress,” Mando assisted the trio in their hunt for the Darksaber, which is currently in the hands of the nefarious Moff Gideon.

While their mission ultimately left them empty-handed, Bo-Katan told Mando to seek out Ahsoka on the forest planet of Corvus. While it’s doubtful that Mando will find Ahsoka so easily (there’s a reason she’s hiding out), the mention of her name means we'll likely see this fan-favorite character in the flesh very soon.

After surviving the Siege of Mandalore and Order 66, which called for the slaughter of the Jedi, Ahsoka is pulled out of time by fellow Jedi and freedom fighter Ezra Bridger. This act saves Ahsoka from being killed in a duel with Darth Vader. Ahsoka arrives back on Ezra’s home planet of Lothal, but they’re attacked by Emperor Palpatine (who wants access to the World Between Worlds). She helps Ezra escape the villain’s clutches, but returns to her rightful timeline with the promise that they meet again. In the Rebels series finale, Ahsoka heads back to Lothal to join Sabine Wren in finding the mysteriously missing Ezra.

It’s doubtful that Mando will find Ahsoka so soon after meeting Bo-Katan. However, when he does finally cross paths with the Jedi, it’s possible that Ahsoka will ask him to help her and Sabine find Ezra before promising to help with Baby Yoda. After all, we know that Mando has historically aided characters on his adventures throughout the galaxy in exchange for information or goods — Frog Lady, Cobb Vanth, and Bo-Katan have all worked out deals that benefited both sides.

Ezra’s whereabouts are pretty much a mystery and he could be anywhere in the galaxy. Maybe Ahsoka doesn’t want to draw too much attention to herself as a Jedi, resulting in a more limited search. Mando, knowing the galaxy relatively well, could grant her and Sabine passage on his ship and connect them to his contacts to assist in the search. The Mandalorian could offer fans more time with Ahsoka and provide the details as to where Ezra ended up in one fell swoop.

Of course, there’s a chance that Ahsoka and Sabine already found Ezra in the five years since the Battle of Endor and don’t need Mando’s help in their search at all. However, considering the nature of the Disney+ series and Din Djarin’s journey so far, it stands to reason that Ahsoka will need his help with something (even if it’s not with Ezra).