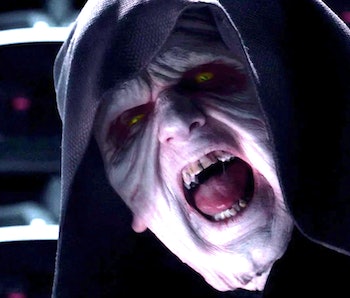 It's casting reveal season for The Mandalorian Season 2, and the announcements so far have not disappointed. Rosario Dawson is (most likely) onboard to finally bring Ahsoka Tano to live-action, and The Terminator's Michael Beihn will also appear in the upcoming season of the smash-hit Disney+ Star Wars show. The latest Mandalorian Season 2 casting rumor claims an iconic horror-movie legend could join in on the adventures of Din Djarin and Baby Yoda, and their character may link back to wily Emperor Palpatine himself.

Star Wars leak site Making Star Wars claims Halloween franchise star Jamie Lee Curtis was on set "multiple times" and could be playing a role in either Mandalorian Season 2 or Avatar 2, which was also filming nearby. If Curtis does join The Mandalorian, it would probably be either a single episode role, like Amy Sedaris's guest spot as Peli Motto, but it's unlikely we'll see her in a series regular role.

Assuming all these things are true, what role could Curtis play? One of the great things about The Mandalorian is that the characters are brand new, but this means we don't have anything to really go on as far as possible roles. Drawing from her recent role as manipulative matriarch Linda Drysdale in Rian Johnson's Knives Out and the world of The Mandalorian, there seem to be two major options.

Firstly, Curtis could be playing a Jedi survivor of Order 66 who is somehow involved with Ahsoka. Mando and his precious Baby Yoda cargo are due to find out the secrets of the Force, and someone of Jamie Lee Curtis's stature and renown could play a General Leia-esque role, providing guidance and revealing the lore of the Jedi.

Or it could be the exact opposite, she could be a baddie working in tandem with Moff Gideon, or the remnants of the Empire in the aftermath of the Battle of Endor. She would be the first female Moff shown in a live-action Star Wars property, but that's not all. A Moff role would not only add to the threat against Mando, but could tie back to Palpatine himself.

If another Moff were added to the mix, the power structures of the Empire would become more clear. That means we could get more insight about how Palpatine survived that fall at the end of Return of the Jedi. It would be interesting to see how he acted in the gap between his supposed death and re-emergence in Rise of Skywalker. Was he just on a sabbatical? Looking for caverns to rent on Exegol?

No matter what role she takes, an appearance by Jamie Lee Curtis would add a whole new layer of gravitas to an already epic series, proving that The Mandalorian still has plenty more tricks up its sleeve.