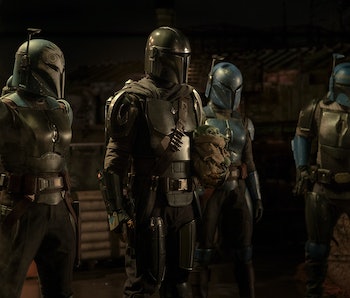 Bo-Katan was just the beginning. In Season 2 Episode 5, The Mandalorian looks set to introduce Ahsoka Tano, a beloved character from the Star Wars cartoons, but what if Ahsoka isn't the only animated character who's about to make their live-action debut?

Before Sasha Banks was revealed to be Koska Reeves, a member of Bo-Katan’s Nite Owls, she was speculated to be playing the Mandalorian warrior Sabine Wren. In the animated world of Star Wars Rebels, Sabine was a fierce leader who fought to protect Mandalore against the Galactic Empire. Prior to that, however, she attended the Imperial Academy that was created when Empire seized control of Mandalore. Sabine also found the Darksaber and learned to wield it, before passing the historic weapon to Bo-Katan, making her the leader of Mandalore.

Of course, we now know that Moff Gideon somehow got his hands on the Darksaber after Rebels, but The Mandalorian has yet to reveal how that happened.

While Ahsoka’s move from animation to live-action has excited fans, Sabine is arguably more instrumental to The Mandalorian’s Season 2 plot. Right now, Moff Gideon is experimenting with clones. He's also still in possession of the Darksaber. It’s unclear what he intends to use it for, but there’s no doubt the weapon’s immeasurable power and significance to Mandalore will play an important role in the plot.

That’s where Sabine could come in. Bo-Katan’s live-action introduction added depth to The Mandalorian’s mythology and helped explain why Din Djarin’s code of conduct was different from other Mandalorians. Sabine could theoretically do the same, only this time it would be to explain the importance of the Darksaber and how Gideon got his hands on it.

It’s possible that Mando’s trip to Corvus (if he can actually find the mysterious planet) is a red herring to lure him to Sabine instead of Ahsoka first. After all, the Mandalorian storyline is starting to take precedence over the search for Baby Yoda’s species (which has been on the back burner for some time now).

With Gideon on the rise and Bo-Katan still searching for the Darksaber, there’s no way the Disney+ series will leave this mystery lingering for much longer. There has to be a reason beyond Ahsoka that Disney and Lucasfilm are keeping footage for the rest of the season under wraps, right? (As one fan recently pointed out, every bit of footage in The Mandalorian Season 2 trailer came from Episodes 1-4.)

The last time fans saw Sabine, she and Ahsoka were off on a mission to find and rescue Ezra Bridger, the Jedi padawan and fellow freedom fighter from Rebels. However, their search took place several years after the final events of that show, and it’s unclear whether the Sabine who might appear in The Mandalorian will be the version from before or after Rebels' finale scene.

Either way, her arrival could segue nicely into the final episodes of Season 2 while effectively bringing the storylines of Gideon, Bo-Katan, and Mando together at last.

The Mandalorian Season 2 airs every Friday on Disney+.