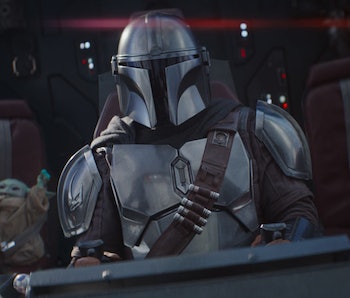 Ahsoka's appearance in The Mandalorian Season 2 is possibly the most hyped in Star Wars history. Ever since it was announced Dave Filoni would be working on the series, there's been fan speculation over if and when he might introduce his most beloved creation, Ahsoka Tano. These rumors were stoked even further by the leaked casting of Rosario Dawson and finally fulfilled in The Mandalorian Chapter 11 by Bo-Katan Kryze.

The Mandalorian Season 2 Episode 5 title is reportedly "The Jedi," but maybe that's not referring to Ahsoka at all (she did technically quit the Jedi Order). A tantalizing new fan theory has us convinced that the ex-Jedi may just be a bridge to an even more famous Star Wars character.

What separates Ahsoka from pretty much every other character in the Mandalorian? She actually knew the original Yoda.

So when Ahsoka meets Baby Yoda, her first instinct will likely be to bring the Child to Dagobah, where she believes Yoda is still hanging out after going into exile at the end of the Clone Wars. That's where things get really interesting.

Redditor u/TheMediocreCritic argues that Ahsoka will take Baby Yoda and Mando to Dagobah. They won't find Yoda, but Ahsoka will sense another Force-sensitive being on the planet. That person? Luke Skywalker.

Luke's post-Return of the Jedi fate is murky, so it's very possible he traveled to the planet where he truly became a Jedi before creating his own Jedi academy and eventually going into self-exile on Ach-To. Luke could help Ahsoka train Baby Yoda and possibly give tips to Mando as he continues on his quest to stop Moff Gideon.

The most exciting part of this theory is the possibility of Luke learning about his dad as Anakin Skywalker the Jedi Master, not Anakin the fallen padawan or Darth Vader. Nobody knows that version of Anakin better than Anakin's old padawan Ahsoka, and she could tell Luke all about his dad's past and the adventures she had with him.

The Inverse Analysis — However, there are some issues with this theory. Firstly, there's the practical one. Mark Hamill doesn't look like he did in the eighties when Return of the Jedi came out. But there's a number of ways this can be handled.

There's the Moff Tarkin method, where an entirely CGI model is used in place of a real actor, like Tarkin in Rogue One. There's the Hank Pym, where visual effects are used to digitally smooth and de-age an older actor, like Michael Douglas in his roles in Endgame and Ant-Man. Then, there's the Han Solo, where an entirely different actor is cast, like Alden Ehrenreich in Solo. Fans seem to think the last option is the best and often bring up Marvel mainstay Sebastian Stan's remarkable resemblance to a young Hamill.

The other downside to this theory concerns canon. If Luke hung out with Baby Yoda for a while, why doesn't he bring that up in the sequel trilogy? Especially now we've seen the beginnings of Snoke in tanks, the knowledge Luke would receive from Mando would surely come in handy later. This could mean their paths never cross, or something happens to Baby Yoda that renders it too painful to talk about. Hopefully, they meet up just long enough for all the happy nostalgia, but not long enough to talk tactics and create a huge new plot hole.