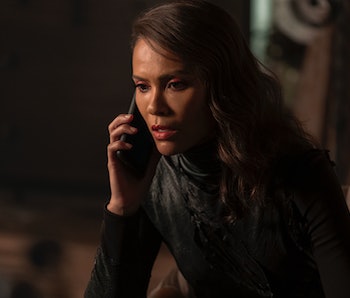 Demons don’t have souls on Lucifer. Maze was well aware of that and never had any issues coming to terms with it. However, Maze’s perspective began to change in the first half of Lucifer Season 5. She realized not having a soul meant that her afterlife was nonexistent and she began making plans for how to obtain one. With that in mind, a thoughtful fan theory reveals how Season 5 Part 2 could reveal a major Maze twist.

Maze spent most of Season 5 Part 1 angry with Lucifer. After all, his trip back to Hell in Season 4 didn’t include her and she grappled with the fact that she was left behind with no way to get back home. After learning about her mother Lilith’s backstory, Maze allied herself with Lucifer’s twin brother Michael, who promised her a soul and a reentry ticket to Hell. However, what if Maze already has a soul and doesn’t realize it?

Reddit user QuentinRedgrave theorizes that Maze was able to grow her own soul through the power of love and it all began when Maze showed Trixie her demonic face in Lucifer’s second season. Trixie accepted Maze for who she was as a person and that allowed the demon to evolve past her anger and disdain for humanity. What’s more, Maze opened up her heart to Linda and the feelings of mutual friendship were returned in kind. In short, it’s possible that Maze has had a soul for quite some time now and didn’t even realize it.

It’s possible Maze puts so much stock in having a soul because she equates it with being human, which she no longer considers to be bad. Of course, if Maze already has a soul then it’s possible that she will come to that realization in Season 5 Part 2.

Right now, she’s working with Michael because he’s offering something she desperately wants. However, Michael’s promises can’t be trusted and he could’ve offered Maze a soul precisely so she would join him against Lucifer. After all, he’ll do anything to screw up Lucifer’s life and turning Maze into his enemy is a good place to start. Ultimately, however, it’s possible that Maze will eventually learn that souls can’t be given and that she’s had one all along.

The Inverse Analysis — According to Lucifer, demons have no soul. However, the truth is that Maze hasn’t been a run-of-the-mill demon in a while. Like Lucifer, she’s evolved in the time she’s spent on Earth. Maze’s friendships and capacity for love may have bestowed her with something she’s only now realizing she wants. As cheesy as it sounds, the theorist may be onto something. Either way, Lucifer Season 5 Part 2 will surely answer these questions for Maze, but it’s a nice thought to ponder in the meantime.