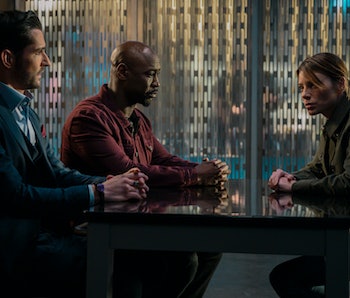 Lucifer Season 5 Part 1 may have changed the rules of Hell. At the end of Season 4, Lucifer returned to his post as ruler to stop the escaping demons. It was unclear how long he would be there and how he could ever return to Earth without anyone else to take over his duties. Now, a fascinating fan theory claims a crucial Season 5 character will take Lucifer’s place.

Lucifer wasn’t happy to be back in Hell, but resigned himself to his fate for the good of those he loved. That is, until his twin brother Michael showed up to wreak havoc on his life and the people in it. Lucifer later asked Amenadiel to take his place while he dealt with Michael. However, Amenadiel’s stay wasn’t long and he left Hell unattended at the behest of God himself.

Reddit user nadia_goulart theorizes that Hell didn’t need Lucifer or Amenadiel as guardians anymore because Lilith was now Queen of Hell. Lilith’s backstory was revealed in the noir episode, “It Never Ends Well for the Chicken.” In short, the mother of demons gave up her immortality to live out the rest of her days as a human and she presumably returned to Hell upon her death.

Coincidentally, Lilith died around the time that Amenadiel returned from Hell. It’s possible she was upgraded to its ruler by God in a show of good faith. God’s plans have always been rather ambiguous. Amenadiel never confirms why Hell no longer needs an overseer, only that God has deemed it so.

There’s a chance that God has given up on the idea of Lucifer ruling Hell. Perhaps the reason he’s arrived on Earth is to set the record straight about his plans for Lucifer and why his former home no longer needed him as guardian. The devil has never liked ruling Hell anyway. It’s possible that he passed a test when he willingly returned in Season 4 and this is God’s way of reneging on his punishment.

If the theory proves true, then Lilith will be the first human to sit on the throne in Hell. Considering that there’s bad blood between her, Adam, and God, Lilith may not even get or want the job. However, Lilith’s introduction in the first half must have been setting up Season 5 Part 2 in a big way.

When Lilith gave Lucifer her immortality, it may have forshadowed him doing the same for her down the line. Perhaps God could entice her with a position she would relish. (Lilith wasn’t exactly fond of being human anyway.) Her assuming the throne leaves Lucifer free to remain on Earth for good — a potential win-win situation for all in Part 2.

More like this
Entertainment
5.1.2022 11:30 AM
Netflix May 2022: 9 mind-blowing sci-fi shows and movies you can't miss
By Dais Johnston
Entertainment
5.9.2022 5:54 PM
Mike Myers unravels his “silly” multiverse in Netflix’s Pentaverate
By Mónica Marie Zorrilla
Entertainment
5.13.2022 11:30 AM
You need to watch the most thrilling South Korean time-travel movie on Netflix ASAP
By Nam Cheah
Related Tags
Share: