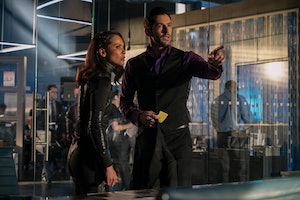 series to binge before Part 2

The first half of Lucifer Season 5 is finally on Netflix. After waiting for more than a year, the streaming service finally released the first eight episodes of Season 5, with more on the way soon. Part 1 introduced fans to Lucifer’s twin brother Michael, Mazikeen’s mother Lilith, and finally went all in on the romantic relationship between Lucifer and Chloe.

While Season 5 Part 2 is on the way, it’s unclear when it’ll premiere on Netflix and it's most likely that you've already binged your way through all eight episodes. So, while waiting for more of the series’ celestial drama, we’ve compiled nine shows that are worth streaming if you enjoyed watching Lucifer.

Fringe is a combination of supernatural fantasy and procedural drama. The series, which went on for five seasons and wrapped on exactly 100 episodes, follows a team of agents and scientists who work cases in fringe science, which focuses on unconventional scientific theories. The show really gets going when the team starts investigating things like parallel universes, singularities, and other such mysteries.

Stream it on: Amazon Prime

8. What We Do in the Shadows

The series, which is based on the 2014 film by Jemaine Clement and Taika Waititi, subverts expectations about well-known supernatural figures. What We Do in the Shadows sees three vampires — Nandor, Laszlo, and Nadja — attempting to live out their days in the modern world while still being attached to their traditions as blood-thirsting creatures. Their misadventures land them in plenty of funny and strange situations.

This charming CW series follows Liv (Rose McIver) after she’s turned into a zombie. The only way for her to cover up her need to feed on human brains, she decides to work in the morgue to get away with eating brains of corpses instead. When Liv discovers that eating the brains of murder victims gives her flashbacks to their lives, she teams up with Detective Clive Babineaux to solve their cases.

John Constantine proved a popular enough character to appear in The CW’s Legends of Tomorrow and Arrow. But, before he joined the Arrowverse, Matt Ryan’s occult detective was the star of his own self-titled series on NBC. The drama followed the exorcist as he hunted supernatural beings (like demons) and sent them back to hell. Fun fact: The “Crisis on Infinite Earths” crossover confirmed that Lucifer and Constantine know each other after the latter hopped over to Earth-666 to ask for a favor from the devil.

Stream it on: DC Universe

Supernatural seems like an obvious choice since the show has several storylines involving angels, demons, and God. Of course, the long-running series started off with Dean and Sam Winchester (Jensen Ackles and Jared Padalecki) as mere hunters of the supernatural (demons, changelings, werewolves) before the show expanded to include celestial beings as well. After several seasons of discussing God and his intentions, the series officially revealed the identity of the omnipotent being in Season 11.

A preacher, a hit-woman, and a vampire go on a road trip together. It sounds like the start of a joke, but it’s basically the plot for AMC’s Preacher. When former criminal-turned-preacher Jesse Cutler (Dominic Cooper) becomes endowed with the power to command people to do his bidding, he, Tulip (Ruth Negga) and Cassidy (Joseph Gilgun) embark on a journey to literally find God.

On a show where the afterlife is split between the Good Place, the Bad Place, and the Medium Place, The Good Place tackles what it means to be a decent person with surprising depth. Eleanor, Chidi, Jason, and Tahani explore the ethics and morality behind it, how it impacts their afterlife situation, and how being a good person is not as cut and dry as they’d assumed. Oh, and there are plenty of torture-loving demons too.

Stream it on: Netflix, Hulu

This British sitcom is on here primarily because it stars Lucifer leading man Tom Ellis. The series follows Miranda Hart’s titular character as she awkwardly struggles in all avenues of her life. Miranda and her old college friend Gary (Ellis) have an on and off relationship throughout the series, which is similar enough to Lucifer and Chloe’s relationship on the Netflix series for fans who enjoy that. Plus, if you want to see Ellis in a comedy, then Miranda is for you.