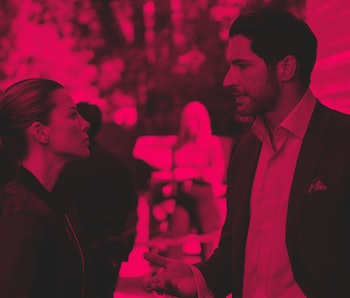 This article about Season 5, Part 2 of the supernatural drama Lucifer was originally published on August 24, 2020 and updated on November 13, 2021 following the release of the season on Netflix. Read on for the original article, with some new changes to reflect the latest updates on this topic.

2020 was a great year to be a Lucifer fan. Not only did Netflix order six additional episodes for Lucifer Season 5, taking the episode count from ten to 16, but the streaming giant also renewed the devilish series for Season 6 after initially announcing Season 5 as its last. Part 1 of Season 5 debuted on August 21, leaving off with a cliffhanger that left Lucifer’s jaw on the floor.

Netflix had always planned for Lucifer Season 5 to be split in two, with the first eight episodes ending on a pivotal moment that saw the long-overdue introduction of God. As you can imagine, Lucifer, Michael, and Amenadiel were very surprised to see their dad, especially given how elusive he’s been all these years.

Here’s everything to know for Season 5, Part 2. everything we know about Lucifer Season 5 Part 2, including its release date, plot, and more.

When was the release date of Lucifer Season 5 Part 2?

No, not according to showrunner Joe Henderson. Here’s what he told Collider:

“One of the big things that we said when we agreed to Season 6 is that we did not want to change Season 5 because we loved Season 5. When the back half gets released from Season 5, when Season 5B gets released, I think people will see how much the whole season fits together like, I think, a beautiful jigsaw puzzle. I love it. We didn’t want to change the ending, but what we did is we just ended Season 5. We basically lopped off the act six that Ildy was in the middle of writing, and these stories that we sort of were speeding through anyways, we realized, in retrospect, we were sort of moving really fast on some things and summarizing moments that could actually be stories.”

Henderson and co-showrunner Ildy Modrovich were hesitant about another season because they felt they’d written a great ending to the series as a whole. Here’s how Modrovich put it to Collider:

“To be honest, we actually were like, ‘No!’ Because we had crafted what we thought was a really satisfying ending. We thought we had stuck it, and we were very worried about having a subsequent season. It just felt like a denouement to what we thought was such a swan song, but then we talked with the room about it for a couple of days, and just tossed ideas around until we found a story that we realized was a whole other chapter that we just hadn’t thought of. We realized we have one more story to tell. Now we can’t imagine not telling that story.”

What is the plot of Lucifer Season 5 Part 2?

Season 5B consisted of a musical episode entitled “Bloody Celestial Karaoke Jam,” which included the cast singing a number of pre-existing songs. We’ve already heard series stars Ellis and Lesley-Ann Brandt belt out some tunes over the seasons.

As for how Lucifer would be impacted by the arrival of his long-absent father, Ellis had this to say (via Entertainment Weekly):

"It takes him back to a very primal place, and his feelings are very raw. I'm just so happy and so proud of what we've done. The first two episodes of the second half of Season 5 are my two favorite episodes of the season, without a doubt."

Who is in the cast of Lucifer Season 5 Part 2?

Is there a trailer for Lucifer Season 5 Part 2?

Yes! The trailer dropped on April 30, only a couple of weeks before Part 2 was released. You can watch it below.

Has Lucifer been renewed for Season 6?

Yes! Lucifer was renewed for a sixth and final season. Season 5 was initially announced as Lucifer's last, but something must have changed because Netflix can't get seem to get enough of the devilish show. The official Twitter account confirmed that Season 6 would be the "FINAL, final" season this time around.

All seasons of Lucifer are currently streaming on Netflix.