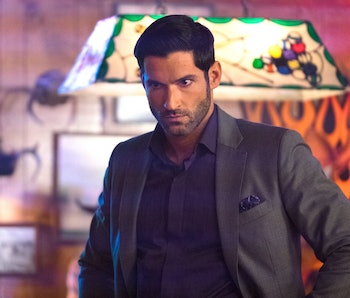 This article about Season 5 of the supernatural drama Lucifer was originally published on June 1, 2020 and updated on October 31, 2021 following the release of the season on Netflix. Read on for the original article, with some new changes to reflect the latest updates on this topic.

Being a Lucifer fan has always felt like a rollercoaster ride. The series was canceled after airing on Fox for three seasons, but that wasn’t the end of the devilishly charming show. Instead, it was picked up by Netflix for a fourth, fifth, and sixth season.

Here’s everything we know so far about the first half of Lucifer Season 5, including its release date, cast, and plot.

When is the Lucifer Season 5 release date?

Part 1 of Lucifer Season 5 premiered on August 21, 2020. Netflix released a fun trailer to announce the official premiere date, along with a look back on Lucifer's sexiest moments. You can watch the date announcement video (cleverly 66.6 seconds long) below!

How many episodes does Lucifer Season 5 have?

Unlike any seasons before or after, Season 5 of Lucifer was divided into two parts. Here’s what Tom Ellis told The Kelly Clarkson Show during a set visit last October:

What's the plot of Lucifer Season 5?

Lucifer ended Season 4 with the main character returning to his post as King of Hell after several demons escaped and convinced him to return. Lucifer reluctantly went back to his hellish duties, primarily to avoid a prophecy that was said to bring about chaos should the devil ever find his true love. By this point in the show, Lucifer Morningstar realized he could be a good person and had also admitted his romantic feelings for Chloe Decker.

"In the stunning fifth season, the stakes are higher than ever. Secrets will be revealed, beloved characters will die, and we’ll finally get an answer to the question, ‘Will they or won’t they?'"

Who's in the cast of Lucifer Season 5?

Tricia Helfer, who appeared in Season 2 and Season 3 as Lucifer’s mother, Charlotte, also returned in Season 5. Perhaps the biggest casting news, however, is that 24 vet Dennis Haysbert played God, aka Lucifer’s dear old dad. That marks the first time God has appeared onscreen in Lucifer.

Is there a trailer for Lucifer Season 5?

Yes, in July 2020, Netflix has finally dropped a brand new trailer for the first half of Season 5. Lucifer confirms that he's actually been in Hell for "thousands of years" so he might be a bit different. Check out Lucifer 2.0 in the trailer below!

Has Lucifer been renewed for Season 6?

Yes! Lucifer was renewed for a sixth and final season. Season 5 was initially announced as Lucifer's last, but something must have changed because Netflix can't get seem to get enough of the devilish show. The official Twitter account confirmed that Season 6 would be the "FINAL, final" season this time around.

Did Lucifer crossover with the Arrowverse again?

In December 2019, Tom Ellis made a cameo appearance in the Arrowverse crossover, “Crisis on Infinite Earths,” appearing on Earth-666 (!) to assist John Constantine in getting to Purgatory. Lucifer helped Constantine because he owed him a favor, though their connection is never explained beyond that. Unfortunately, the crossovers stopped there, as Constantine did not make an appearance on Lucifer Season 5. It looks like those possibilities remain locked behind the Arrowverse.

All seasons of Lucifer are currently streaming on Netflix.