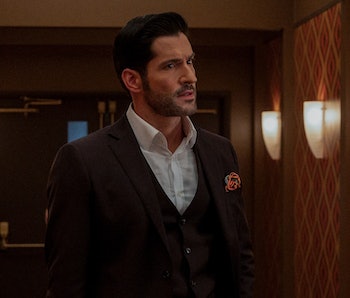 What do you truly desire? That is the question the devil has posed to several characters over the last five seasons of Lucifer. The only person who has ever been immune to Lucifer Morningstar’s hypnotizing ability was Chloe Decker. In Season 1, the series established that Lucifer was not only unable to work his so-called mojo on Chloe, but that she literally made him vulnerable. That meant bullets, knives, and punches to the face could bring him harm when she was around.

Spoilers ahead for Lucifer Season 5.

However, Lucifer Season 5 Part 1 took a hard left with regards to the devil’s powers and introduced an unexpected new vulnerablity. After Lucifer and Chloe finally get together, Lucifer wakes up to find his mojo has been transferred to the detective.

He begins to wonder who he is without his abilities,and getting injured never seemed to bother him as much as the loss of his mojo. His irritation leads him to believe that God is somehow to blame, like always. Meanwhile, Chloe relishes her new ability to uncover people’s true desires, including Lucifer. The events following the power swap lead to Lucifer’s lesson on what it means to share in a relationship (something he’s never had to do before).

Entertaining as it is, the circumstances surrounding the flipped dynamic are rather baffling. Things get weirder after Lucifer gets his mojo back suddenly and without explanation. It would seem that Lucifer is able to pass on his mojo via sex, but getting it back doesn't work the same way. Lucifer’s excited that he feels like himself again, but he doesn’t stop to fully assess the reason for why his mojo has returned so abruptly. What’s more, Lucifer also gains back his invincibility in the eighth episode, now able to take a bullet despite Chloe being in the same room.

Of course, the series has played fast and loose with Lucifer’s power before, but it’s never been this confusing. We know Lucifer has a lot of personal issues to sort through and that it’s preventing him from telling Chloe that he loves her. We also know that Chloe has and continues to affect his powers.

All that said, it’s possible that Season 5 Part 2 will resolve this storyline and reveal the true reason for Lucifer’s mojo issues. If his invincibility and mojo are inherently linked to his feelings, then perhaps his sorting through them will help clear up the discrepancy.

However, it’s also possible the power swap is a clue that Lucifer could lose his powers completely in the second half of Season 5. After all, the devil’s confidence is deeply connected to his cosmic mojo and perhaps a part of his journey is finding out who he is without them. Lucifer's twin brother Michael may also have something to do with this bewildering subplot. We don’t know what his plans are, but he shouldn’t be underestimated.