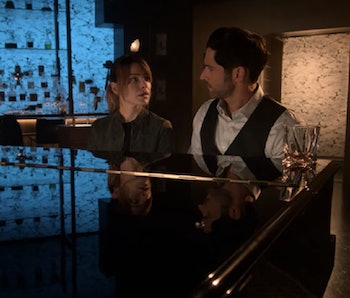 Characters will be singing and dancing their way through an episode in the upcoming batch of episodes of Lucifer Season 5 Part 2. Netflix recently shared a clip from the upcoming musical episode, “Bloody Celestial Karaoke Jam,” during DC FanDome. Upon closer inspection, that footage may have revealed a crucial clue about the architect behind the musical. Let's dive in.

Spoilers ahead for Lucifer Season 5 Part 2.

In the scene from the musical episode, Lucifer, Chloe, and Ella investigate a crime scene when Ella suddenly starts singing Queen’s “Another One Bites the Dust.” It isn’t long before everyone else follows suit and commences dancing around the football field. When the music stops, Lucifer is confused — Ella and Chloe resume talking to him as though nothing happened. The implication was that only Lucifer was aware they were in a musical at all.

We previously speculated that a musical demon could force people to sing their emotions a la Buffy the Vampire Slayer’s “Once More, With Feeling.” However this latest footage suggests, Lucifer seems to be following in the footsteps of Zoey’s Extraordinary Playlist, where only the titular character can hear and see the choreographed musical numbers.

Lucifer’s twin brother Michael may have trapped him in a Hell of his own making. We know Michael has been up to no good and basically wants to destroy Lucifer’s life and reputation. The petty twin also wants revenge and to prove he’s superior. What better way to torture Lucifer than to put him in a musical only he knows about? The title does include the word “celestial,” which seems to imply that an angelic force is behind the whole scenario. If Lucifer is indeed stuck in some sort of Hell loop, it would surely drive him bonkers.

In the first half of Season 5, Michael claimed he’d been whispering things to Lucifer and influencing his every move for centuries. In Season 4’s eighth episode, Lucifer says he has a hard time drowning out the cacophony of voices in his head.

What if that admission wasn’t metaphorical? Perhaps Michael has finally found a way to get one over on Lucifer, but instead of whispers, he’s put the power of song to good use.

Or, perhaps the archangel Sandalphon is behind these musical hijinks. In the Lucifer comics, Sandalphon took Lucifer’s side in his rebellion against God and was the cause for Michael’s shoulder injury. Biblically, Sandalphon is considered the angel of music and he’s often depicted helping people better their communication to God through music.

Season 5 Part 2's musical episode could very well be Sandalphon’s introduction, which would also explain why only Lucifer can hear people singing. We know the characters will be singing through some of their emotions — this may be Sandalphon’s way of helping Lucifer give voice to his issues with God, given how connected the archangel is to the devil and his plight.