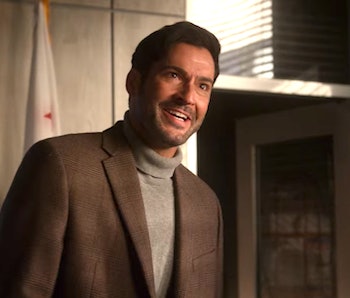 Lucifer Season 5 Part 2 doesn’t yet have a premiere date, but it’s likely to debut on Netflix by the end of the year. The cast has already resumed filming on the season’s final episode. With a release date arriving soon, one of the biggest questions left unresolved centers around Michael's mysterious past.

Lucifer’s twin brother did not come to play. First introduced in Lucifer’s Season 5 premiere, the archangel Michael masqueraded as the devil while he was in Hell. Despite the charade, there were some notable differences between the brothers. Michael had an American accent and a mysterious shoulder injury that he attempted to keep hidden. A new fan theory offers a compelling argument that the reason behind that injury will play a big part in the second half of the season.

We know that Michael can temporarily “fix” the hitch in his shoulder, but he cringes whenever he has to readjust it back to its natural state. Upon closer inspection, however, it’s Michael’s wing that is wounded and not his shoulder. It’s slight, but you can see how the right wing is flattened and not as resilient as the other.

It’s possible that Lucifer landed one final blow to his brother before being cast out of the Silver City and Michael is still bitter about it. It’s not hard to imagine Lucifer doing such a thing considering how he scarred Michael’s face in Season 5 to prevent him from fooling loved ones. There’s a lot of bad blood between the twins and we know Lucifer is capable of familial violence (he did stab Uriel with Azrael’s blade).

Speaking with TVLine, Lucifer co-showrunner Ildy Modrovich revealed that Michael’s shoulder injury won’t remain a mystery for long. After all, Michael’s shoulder hitch is far too obvious and purposeful for its backstory to go neglected.

“We find out why he has it in [Season] 5B. We explore it pretty in depth.”

The Inverse Analysis — The theory is highly plausible. In the Lucifer comics, the story plays out similarly. However, Michael’s injury is caused by the angel Sandalphon, who sided with Lucifer in the rebellion and stabbed Michael in the back with a spear afterward. Sandalphon then sent Michael to a pocket universe as punishment. It’s possible that the series will leave Sandalphon out of the equation and stick with the story that Lucifer stabbed Michael. It certainly adds more fuel to their celestial feud that way.