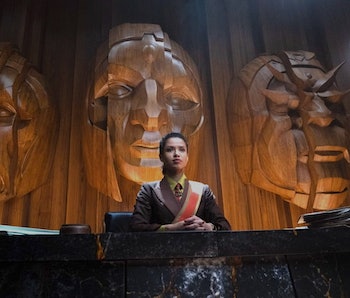 Loki made it clear from the start that something was up with the Time Keepers. They literally loomed over all members of the Time Variance Authority, symbolically hovering above every variant and judgment. This hunch was confirmed in Episode 4, where it was revealed the Time Keepers do, in fact, exist. They’re just animatronic robots that wouldn’t be out of place at an intergalactic Chuck E. Cheese.

While that reveal answered whether the Time Keepers were really in charge (and the answer is a firm “no”), it’s still worth investigating who is overseeing the TVA. Here are the five most likely suspects who may be truly in charge of the Sacred Timeline.

If you were a secret leader of a massive, reality-shifting institution hiding behind all-powerful figureheads, where would you hide? The most obvious answer would be in the lowest-profile position in the TVA but still in a place where you can keep tabs on everyone involved.

That’s Casey, who may not know what a fish is, but handles all evidence personally. That’s a big job for such a lowly office worker. Maybe he’s hiding more than Infinity Stones in all those drawers.

At this point claiming Mephisto is behind everything is the crying wolf of Marvel theories, but it makes sense. Mephisto is basically the Marvel Comics equivalent of the Devil, and through controlling time, he could enact the worst timelines, like one that involves the halving of the Earth’s population through Thanos.

But if the literal Devil is in charge of the Sacred Timeline, why would he allow the Avengers to undo the Snap? It’s far-fetched but worth mentioning all the same.

Judge Renslayer has basically acted as the Time Keepers’ mouthpiece so far. She’s the one who tells Agent Mobius they’re breathing down her neck about the Loki case and the one who arranges for them to handle Loki and Sylvie “personally.”

Could the Time Keepers be nothing more than a way to invoke fear of authority within the ranks of the TVA? And if that’s the reason Ravonna insists they exclusively tell her what their will is, it certainly would explain why she refused to give Loki an audience with them.

But programmed by who? Maybe the Time Keepers were real at one point, but then they left Miss Minutes to run things, not expecting her to become so militant.

One popular fan theory is that the entire TVA is held within the quantum realm because, after all, time works differently there. It’s well known that Jonathan Majors will be playing Kang the Conqueror in Ant-Man and the Wasp: Quantumania. If the TVA is in a realm set to be explored by that film, it makes sense the two would share a villain.

What’s more, in the comics, Kang has a reunion with his variants from different parts of Marvel’s multiverse, and together they create the Council of Kangs, not unlike what Loki finds himself facing at the end of Episode 4. Kang is the perfect Big Bad for Loki. He’s a villain who is not only big enough to explain the absent Time Keepers, but is so powerful that it will take more than just the final two episodes of Loki to deal with him.