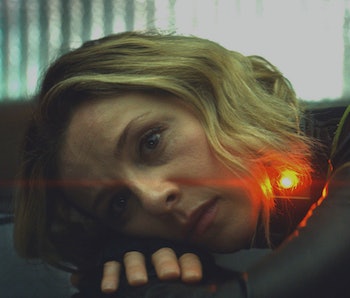 Loki Episode 4 ended with several shocking twists, but one, in particular, has us worried. Here's our theory on the future of Owen Wilson's Mobius. Warning! Spoilers ahead for Loki Episode 4.

Near the end of Loki Episode 4, Mobius finally accepts what Loki has been telling him. He wasn’t created by the Time Keepers. Rather, he’s a variant who was arrested by the Time Variance Authority and forced into their employment (the same seems to go for pretty much everyone working at the TVA, except for maybe Ravonna Renslayer).

But as soon as Mobius comes to terms with this fact, Ravonna shows up and has him “pruned” right in front of Loki. Based on everything we’ve seen up to this point, that means Mobius is dead. But not so fast. After all, if there’s one thing we know for a fact about the TVA, it’s that most of what they say is a lie.

This matters a lot more a few minutes later when Ravonna decides to do some pruning herself, picking up the TVA weapon and using it to pop Tom Hiddleston in the back, at which point he promptly disintegrates. So is Loki dead too? Thankfully, a post-credits scene provides at least one answer.

After the credits role, we see Loki wake up in a post-apocalyptic version of New York where he comes face-to-face with... himself. There are actually four Lokis waiting for him (including Richard Grant and a crocodile). But that’s not the important thing for our very specific purposes.

What matters here is that Loki is clearly alive and he’s surrounded by other Loki variants. This almost definitely means that when a variant gets “pruned” by the TVA they aren’t destroyed, they’re just sent to this apocalyptic timeline.

This brings us back to our original question

Is Mobius dead in Loki Episode 4?

We don’t know for sure, but it seems very likely that the answer is no. I’d wager that Owen Wilson’s character is now stuck in the same timeline as Tom Hiddleston’s Loki. They could even reunite in the opening moments of Loki Episode 5.

It’s also possible Mobius is stuck on some other timeline. After all, we don’t know how the TVA’s pruning sticks work. We just know they don’t do what we thought they did.

But if you’re worried we’ve seen the last of Owen Wilson, you can rest easy. A quick look at his IMDb confirms he’s in the remaining two episodes of Loki, all but confirming that we’ll see Mobius again very soon.