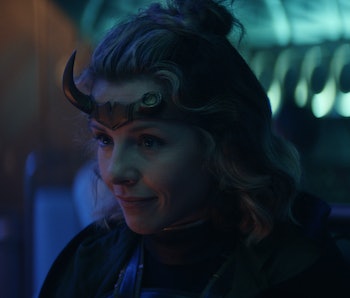 Loki Episode 3 does a lot to clear up some of the mystery surrounding the Time Variance Authority. After weeks of fans speculating about the origins of the TVA’s agents, the latest chapter of the Disney+ series finally confirmed that the organization’s “employees” are all, in fact, captured time variants who have had their pre-TVA memories wiped. It’s a fascinating revelation and one that could make a major impact in the future.

But as is often the case with Marvel, the episode’s TVA reveal manages to answer one question while raising several new ones at the same time. Indeed, there’s still a lot we don’t know about the TVA — including where and when it exists within the Marvel Cinematic Universe.

An Extremely Old Margarita Bar — At the start of Loki Episode 3, we see Sophia Di Martino’s Sylvie infiltrating the mind of Sasha Lane’s Hunter C-20 (who she captured at the start of Loki’s second episode) using her enchantment magic. That infiltration takes the form of Sylvie pretending to be a longtime friend of the captured TVA agent by having drinks with her in a margarita bar.

Later on, when Sylvie reveals to Loki that the TVA agents are all captured time variants, she says that her enchantment powers sometimes require her to create a fantasy situation from the memories of whoever she’s enchanting. In the case of C-20, this particularly difficult because the TVA agent’s mind was so clouded that she had to go back hundreds of years to find one of her memories from Earth.

It’s the “hundreds of years” part of Sylvie’s speech that sticks out. Everything she recreated in the fantasy for Hunter C-20 felt like it belonged in a modern-day version of our Earth, from the style of the margarita bar, their clothing, to the song that was playing in the background. So why does Sylvie say the situation was created from a memory Hunter C-20 has from literally hundreds of years ago?

Life in the TVA — There are two possible answers to that question. The first is that the TVA is based hundreds of years in the future — meaning centuries after the events of movies and shows like WandaVision and Avengers: Endgame. That’s a legitimate possibility, especially since the organization seems to have the ability to travel to moments in both the distant past and several decades in the future.

That explanation would also make sense considering that, as Mobius says in Loki Episode 2, the TVA agents aren’t actually aware of what happens at the end of the Sacred Timeline. Maybe that’s because they’re operating hundreds of years from where the current MCU movies take place, but not far enough into the future to know absolutely everything that’s supposed to happen?

That’s a fun theory, and it would also, thankfully, place the TVA in a more tangible space within the MCU’s overall timeline. But it seems more likely that the real reason Sylvie had to reach back hundreds of years into C-20’s mind wasn’t that her life on Earth actually took place hundreds of years before the TVA was established, but because it’s been centuries for her since she was actually at that margarita bar on Earth.

In other words, if the TVA exists outside of the Sacred Timeline (as many fans believe it does), then it’s only logical to assume that its workers do too. Therefore, Hunter C-20 could have been captured in 2019 when she was, say, 25, but the moment she was captured is also the moment she stopped physically aging because it’s when she stopped existing within the natural flow of time.

The Inverse Analysis — It’s possible, knowing Marvel, that Loki will reveal an entirely different explanation for Sylvie’s “hundreds of years” comment than the ones described above. It’s also possible the show will never mention this again.

As of now, though, these two answers seem like the only possibilities that make any sense based on the little that we know about the TVA. And if it’s the second explanation that proves to be correct, then not only does that mean the TVA is brainwashing and mind-wiping variants, but that it’s also turning them into unquestioning servants for, possibly, forever.

You know, just in case we needed any more reason to root for the TVA’s destruction. Go get ‘em, Sylvie.