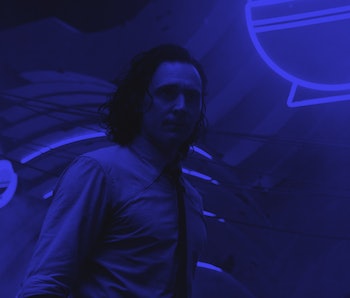 After spending its first two episodes insisting that the TVA’s workforce was made up of beings created by the organization’s cosmic founders, the Marvel series finally revealed the truth of the matter in its latest episode. It turns out that the TVA’s agents are — as some fans had previously theorized — captured variants who’ve had their minds wiped.

It’s a revelation that further solidifies just how untrustworthy the TVA’s propaganda is and why most of what the organization says likely isn’t true. That includes the organization’s claim to be run by three “space lizards” known as the Time Keepers; in other words, there’s probably someone else pulling the TVA’s strings.

Who could it be? A new Loki fan theory offers up one compelling possibility.

The Theory — Reddit user u/Bossman471 speculates that the ruler of the TVA isn’t the Time Keepers, but another Loki variant we have yet to meet. More specifically, the Redditor argues that the TVA’s ruler could be the older variant of the God of Mischief that actor Richard E. Grant is rumored to be playing in the Disney+ series.

Grant has been noticeably absent from the first three episodes of Loki, and fans are starting to wonder who the actor is really playing in Loki. Now, if this theory is to be believed, it’s possible Grant isn’t just playing an older variant of Tom Hiddleston’s Loki, but also the mysterious head of the TVA.

This makes a lot of sense, if you think about it.

The Man Behind the Curtain — Loki Episode 3’s reveal that all TVA agents are brainwashed variants makes this theory feel a lot more plausible. If all TVA agents really are variants, it’s entirely possible the organization’s leader could also secretly be one.

Beyond that, the reveal makes logical sense, based on what we know about both the TVA and the Loki variants played by Tom Hiddleston and Sophia Di Martino. What did Hiddleston’s Loki immediately begin doing after coming face-to-face with the power of the TVA for the first time? He started plotting to rule it himself.

Meanwhile, in Loki Episode 2, Owen Wilson’s Mobius states that the TVA has dealt with numerous Loki variants over the years, and the existence of Di Martino’s Sylvie establishes the possibility that some of them may have evaded being “pruned.” So who’s to say that another Loki variant hasn’t already beaten Hiddleston’s to the punch?

That’s a legitimate possibility, and given what we know about Loki, in keeping with the character’s attitude and personality. It’d even explain why the TVA is told to “prune” every variant it can. If all other Loki variants are captured and reset, then another Loki secretly running things at the TVA could reign free, without fear of being usurped.

Furthermore, this reveal would explain why Di Martino’s Lady Loki not only goes by “Sylvie” but hates even being referred to as Loki. If a Loki variant really is responsible for the TVA’s cruelty, she might have grown to detest the “Loki” identity altogether.

The Inverse Analysis — This is a theory that not only works because of what’s been shown in Loki’s first three episodes, but also ties back into what has been said about the series previously.

Hiddleston himself explained to Empire back in April that the series is “about identity” and “integrating the disparate fragments of the many selves” that Loki has the potential to be. “Loki is the quintessential shapeshifter,” Hiddleston told Empire. “His mercurial nature is that you don’t know whether, across the MCU, he’s a hero or a villain or an anti-hero.”

We’re already seeing Hiddleston’s Loki evolve into more of a heroic figure in the Marvel Cinematic Universe, while Di Martino’s Sylvie seems to exist as more of an anti-hero. Following that logic inevitably leads one to wonder: will we get to meet a Loki variant that’s more of a flat-out villain? Richard E. Grant is certainly capable of playing that side of the character, and nothing screams “villain” quite like ruling over a corrupt cosmic organization that enforces its will across the universe without regard for those it hurts.

More than anything, this reveal would force Hiddleston’s Loki to once again change in unexpected ways. After all, what’s the point of taking over the TVA if you’ve already been there, done that?