“I’ve seen weird before, but this is weird.” 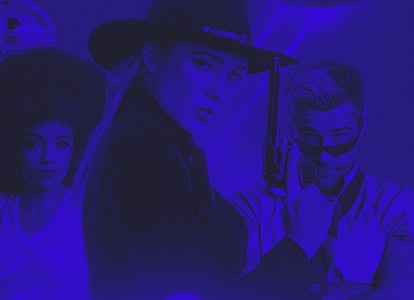 Five years ago, DC’s Legends of Tomorrow launched as a spin-off of the successful “Arrowverse” on The CW, featuring a lineup of B-tier heroes from DC Comics shows like Arrow and The Flash to team up and fight villains in a time-traveling space ship.

Now, heading into its sixth season, Legends of Tomorrow is something else entirely.

These days, the show is firmly entrenched in goofy, chaotic mischief with a regular cast far different than the ones who joined in 2016. Fans who’ve stuck with the Legends know this isn’t new; the show has pretty much looked like this since its third and fourth seasons. But Legends of Tomorrow Season 6, set to premiere May 2, is turning up the volume with gooey time-traveling aliens and, even weirder, a Disney-esque animated sequence.

What Happened? — In a busy two minutes that opens with a fourth-wall-breaking nod (a vintage Warner Bros. logo from the ‘70s), Legends of Tomorrow secretes alien ooze and horror movie screaming. From there, it’s reality show competitions, the Cold War, the Old West (a seasonal tradition for the series), something involving an alien-themed burger joint, and yes, a tribute to the ‘90s Disney Renaissance.

While it only looks like the writers of Legends of Tomorrow throw around random ideas on a whiteboard, longtime co-showrunner Phil Klemmer says there is a central story. The new season picks up from Season 5, which ended with team leader Sara Lance (Caity Lotz) kidnapped by aliens. To find her, the Legends have recruited a new member, “Spooner” (Lisseth Chavez), an expert conspiracy theorist who believes she can communicate with aliens.

Standing in their way is Bishop, a new character played by Raffi Barsoumian (The Vampire Diaries) who has “had his sights on Sara for a long time.” Described as a “mad genius with a god complex” by Entertainment Weekly, Bishop “purports to have altruistic reasons for saving humanity.”

“He thinks Sara is instrumental for that,” Klemmer said. “Of course, his ideas are completely unhinged, but he's got a fascination with her.” He clarifies it’s not a “romantic fascination,” but a dangerous one nonetheless:

“Even if Sara is able to escape his clutches, this isn't the sort of guy that's going to give up on his plan. Even though she might escape her kidnapping, she's going to be dealing with the aftermath for the whole season."

Fire the canon — It’s a testament to Legends of Tomorrow it can do stuff so off from the comics and viewers are invested, even excited, rather than turned off. (Fans’ mixed reactions to Mortal Kombat, with its new protagonist, shows how much trust needs to be earned from dedicated audiences.) Bishop has no origins in the DC comics, and no one cares. I can’t even remember the last time Nate (Nick Zano) has fought in costume as Steel.

But diverging from canon isn’t a mark against Legends of Tomorrow. If anything, it’s the defining feature of the series.

Though it takes place in a universe inhabited by The Flash and Superman, the show is wildly accessible as it doesn’t require knowledge of DC lore. It has its own mythology that’s nearly 100 episodes deep, which on its own requires some Wikipedia scanning if you’re impatient to binge. But at least you don’t need to know anything about the New Gods or the Green Lantern Corps. to enjoy Legends of Tomorrow having Sisqó perform “Thong Song.”

The Inverse Analysis — There’s something comforting to Legends of Tomorrow continuing to be the wacky, wild child of superhero TV.

While The Boys tries to subvert the genre with grit and grime, and shows like The Falcon and the Winter Soldier try (and sort of fail) in trying to Mean Something, Legends of Tomorrow is the equivalent of taking a bong rip and saying the first thing that comes to your head.

Honestly? TV is better for it.

Legends of Tomorrow will return May 2 on The CW.

More like this
Entertainment
15 hours ago
The DC Universe is Taking the HBO Approach With Its TV Shows
By Dais Johnston
Entertainment
Jan. 26, 2023
Shazam! Fury of the Gods trailer pits the family against Helen Mirren and her dragon
By Mónica Marie Zorrilla
Entertainment
Jan. 27, 2023
Doom Patrol and Titans' cancellations mark the end of DC's best era of TV
By Eric Francisco
LEARN SOMETHING NEW EVERY DAY.
Related Tags
Share: