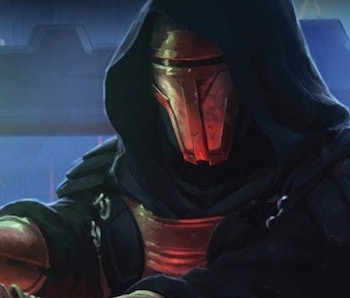 Like an onion eaten by Jar Jar Binks, Star Wars canon has a lot of layers.

For most fans, the Star Wars films and TV shows are what matter most. For the more dedicated, the immersive fully-approved new canon — including the post-2014 novels and comics — is the next step into a larger world. For older (read: crankier) fans, the "Legends" canon from the 1990s is the expanded universe we miss the most. And then, perhaps the most dedicated, are the fans of Knights of the Old Republic, a video game saga better known as KOTOR. It's an aspect of distant Star Wars history that is mostly non-canon that remains very much beloved.

A new rumor suggests that KOTOR is coming back (again) as an officially sanctioned title from the new Lucasfilm Games umbrella. If true, this could mean many things for KOTOR loyalists, but for the rest of us, it means that one pivotal Sith Lord could finally get fully rebooted in the canon. That's right, if KOTOR is coming back that means Darth Revan is (probably) coming back, too. Wild speculation ahead.

Who is Darth Revan?

Darth Revan is a Sith Lord who lived around 4,000 years before the events of the classic Star Wars trilogy. In the non-canon KOTOR continuity, Revan began his life as a Jedi, became a Sith, and eventually, tried to play the Light and the Dark Side against each other for his own benefit. Throughout his complicated life, he turned to the Dark Side twice, lost his memory at least once, and was briefly confronted by his own Light-side spirit. He's a fan-favorite that's the sole icon for why KOTOR is so popular.

If you want to know more about his wild backstory, you can do no better than this hilarious video that attempts to explain the entire "story" of KOTOR in 3-minutes. (Note: The video details Revan's entire story, which spans across KOTOR 1 and the Star Wars: The Old Republic massively multiplayer online role-playing game.)

Is Knights of the Old Republic getting rebooted?

According to Star Wars leaker Bespin Bulletin, some kind of new Knights of the Old Republic game is coming, but the big question is which game developer is taking it on. Because all-new Star Wars games seem to be united under the new banner of Lucasfilm Games, it's unclear what role outside developers have in making new titles (like a rebooted KOTOR) happen. So, for now, the answer to the question of a new version of KOTOR feels like a solid maybe, but the people making it is not EA.

Assuming new Lucasfilm Games are part of "real" Star Wars canon (which it seems like they already are) then a new KOTOR possibly opens up the door for the distant backstory from Knights of the Old Republic to be retold in a newly canonized way. Analogously, this would be similar to the way Grand Admiral Thrawn was rebooted for Rebels. Obviously, the specifics of Thrawn's actions in Heir to the Empire are slightly apocryphal in light of Rebels and the newer Ascendancy novels. But, as of this writing, Darth Revan has very little "real" backstory beyond his extensive story in Legends.

That said, Revan has been made low-key canon in two fairly significant ways in the last few years. In the visual guide to The Last Jedi, a huge reference was made to Revan via the mention of the "Jedi Crusaders." Revan was supposed to appear in a deleted scene for The Clone Wars, and in the 2019 book Star Wars: The Rise of Skywalker: The Visual Dictionary, Revan was name-checked, but only in reference to something called "The Revan Legion," which is basically any army associated with the Sith Eternal, first introduced in Episode IX.

Because TROS Visual Dictionary made Revan canon, that kind of means his backstory in KOTOR could suddenly be totally reimagined. And if a new KOTOR game is coming, then you can bet the backstory of Darth Revan will be retooled to fit in perfectly with everything else we know about the Sith.

Nobody knows what those changes might mean, or how the character's backstory could change. But, one thing seems like a lock: If a rebooted KOTOR brings back Revan, that sweet helmet is coming with him.

Some old KOTOR games are still available to download on STEAM.