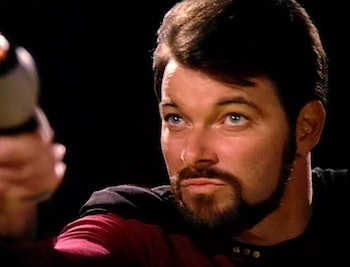 Jonathan Frakes knows a thing or two about the history of Star Trek. He and his Next Generation castmates were the last Trek ensemble to be cast by Trek creator Gene Roddenberry. And so, when Frakes tells you he thinks the late Roddenberry would approve of Star Trek: Picard, it’s a pretty big claim. Spoilers ahead for Picard Season 2, Episode 5, “Fly Me to the Moon.”

After time-traveling from a dystopic alternate future, Jean-Luc Picard and his allies have found themselves entangled in a complex series of events in 2024 in Episodes 5 and 6 of Picard Season 2. These are directed by Jonathan Frakes, who’s famous for playing Riker throughout the Trek franchise, and perhaps just as famous as a frequent director of Trek films and numerous episodes of the many different TV series. “I’m happy to continue to be part of the next, next generation of Star Trek,” Frakes tells Inverse.

In 1995, Frakes directed the DS9 episode, “Past Tense Part II” which, like Picard Season 2, also took the Starfleet heroes back to 2024. In both cases, Trek’s past and our near future are a mess. Picard Season 2 has been critical of America’s immigration policy, as well as contemporary economic and social disparity. These issues were also the focus of DS9’s “Past Tense,” which Frakes is well aware of.

“It has a lot to do with immigration and the mistreatment of brown people,” Frakes says. “It has a very similar and painfully accurate theme. Being set in 2024 serves as a cautionary tale to all of us.”

Because Picard is tackling real-world issues so directly, Frakes believes this is the kind of bold social commentary that Gene Roddenberry would have not only approved of but been thrilled by. “Roddenberry, even though he was an avowed atheist, is smiling at us from somewhere,” Frakes says with confidence.

“Fly Me to the Moon,” not only introduces a new member of Jean-Luc’s family, Renée Picard (Penelope Mitchell), but also actors Isa Briones, Brent Spiner, and Orla Brady in new roles. Back in 2021, Spiner told Inverse that he was playing a new member of the Soong family, who we now know is the mysterious and mercurial Adam Soong, disgraced geneticist. For Frakes, this meant he was back directing his longtime TNG friends and co-stars, Spiner and John de Lancie (as Q), for the first time in many years.

“[John] de Lancie is still playing Q, essentially,” Frakes says. “But Brent found a new color in this bizarre Soong family tree; Lore, Data, Altan, now Adam, this weird rainbow of characters that are all related somehow. He’s as fit as a fiddle, but I think he tried to make this character more of a schlub. He’s got some of Lore’s nastiness. But he’s also conflicted about his daughter, too. It was in great hands with Brent, who's a masterful actor. I daresay both Brent and de Lancie are acting with as much strength as I’ve ever seen.”

Frakes can’t reveal anything else about the new characters, nor the big surprises in store for Episode 6. But he does tease that Alison Pill “blew my mind.”

Frakes also confirmed that he’s getting ready to direct episodes of Strange New Worlds Season 2. He may be a Trek veteran, but it feels like his biggest contributions to the franchise are still ahead of him.