Method to the Madness 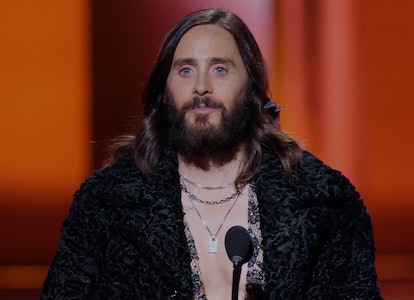 Jared Leto is the kind of actor Hollywood loves. He’s got a rockstar persona as the frontman of 30 Seconds to Mars, he won an Oscar in 2013 seemingly out of nowhere for Dallas Buyers Club, and he loves a “transformative” role. For House of Gucci, he took his role of Paolo so seriously he told i-D he “climbed into that creative cave and came out through the bowels and intestines into the esophagus of the one and only Paolo Gucci.”

But he’s probably most notorious for his forays into the superhero genre. In Suicide Squad, his Joker barely made the final theatrical cut, but that didn’t stop him from preparing for the role by playing some truly ridiculous pranks on his coworkers.

“An actor who needs 45 minutes to go to the bathroom is gonna waste an enormous amount of onset time.”

His latest comic book role is the living vampire (and sometimes Spider-Man antagonist) Morbius, and in an interview with Uproxx, Morbius director Daniel Espinosa reveals that Leto frequently held up production of Morbius so he could use crutches to walk to the bathroom.

Many fans and bloggers are blaming Leto’s love of “Method acting” for this behavior — but is the Method really to blame? We asked an expert to define just what Method acting is, and how it differs from Jared Leto’s process.

What is Method Acting?

Method acting (with a capital M) has a long history in theater and a shorter (but illustrious) history in film. Isaac Butler, the author of The Method: How the Twentieth Century Learned to Act, defines it to Inverse as “a technique and approach that draws on the interior reality of the actor, the self, the psyche, your emotions, your memories, and the things that make you you as a way of bridging the imaginative gap between the actor and the character.”

The Method is derived from the System, an acting technique developed by Russian director Konstantin Stanislavski and adapted by American acting teacher Lee Strasberg (who you may recognize as Hyman Roth in The Godfather Part II, alongside his former student Al Pacino.) It’s probably most known for its exercises in affective memory, which Butler defines as when “actors recall the sensory details of emotionally charged memories in order to literally trigger themselves to have the emotions associated with that memory.”

So, to put it bluntly, Method acting is not “becoming” a character, but using the parts of yourself and your own history to relate to the character.

Jared Leto’s acting technique is more akin to what Robert De Niro practiced on the set of movies like Raging Bull — going above and beyond in research in order to completely immerse himself in the role. According to Vanity Fair, he trained for almost a year, boxing roughly 1000 rounds and gaining20 pounds of muscle in the process. De Niro got so good his trainer scheduled three professional fights for him (the actor won twice).

This is certainly a method, but calling it the Method is a bit too far. De Niro mostly studied under Strasberg’s rival Stella Adler, and according to Butler, “De Niro took her ideas and ran with them, much further than she probably would've counseled people should do.”

Strasberg was never a fan of this “full immersion” technique. He even told a story in an interview published by the Tulane Drama Review that may as well be in direct response to Leto’s antics:

“You've heard actors say, ‘Hit me, hit me-if you won't hit me, I won't get it.’ Well, that's not acting. Sure, if I hit you, you're going to fall down. What's the acting in that? The whole point is that I seem to hit you, and yet the way in which I hit you is so believable and is so filled with all the tension and reality of the hitting, that you fall down and you are hurt, and I haven't touched you. That's acting.”

That said, this style isn’t completely foreign to the screen. Beyond De Niro, there are three big actors today using this technique: Daniel Day-Lewis, Jeremy Strong, and Jared Leto. The difference between the former two and Leto is in the term “Method” itself.

“De Niro didn't use the term Method acting to describe himself and neither did Daniel Day-Lewis and neither does Jeremy Strong,” Butler says. But Jared Leto has gone on record that while he prefers the word “immersive,” he appreciates the term. Because of that, the reputation of Method actors is affected by his work, Method or not.

Even if he’s not using the Method, is Leto’s technique worth all the hassle?

But... does he deliver? Unlike Day-Lewis and Jeremy Strong, who deal pretty exclusively in dramas that could be ripped whole cloth from the stage, Jared Leto has now worked on two separate superhero movies. He’s brought his extreme technique to each, and both works were lambasted in the reviews. So if reviews are any indication, his acting style may not be conducive to this genre.

“It's not necessary to do all that to play the Joker or a vampire in a superhero movie,” Isaac Butler tells me. “The kind of acting those movies demand is old-school studio system persona acting. It's not really a full transformation. You're using your own personality. Robert Downey Jr.’s Tony Stark is probably the best example of this.”

“It's not really a full transformation. You're using your own personality.”

Then, there’s the basic courtesy expected of an actor on set, especially for a big-budget blockbuster. Leto also told Variety, “It's also my job to show up and, you know, be a pleasure to work with. And to be collaborative, and to have a good experience on set.” It’s kind of hard to do that when your coworkers are never sure what to expect from you — or how much you’re going to impede production.

“An actor who needs 45 minutes to go to the bathroom is gonna waste an enormous amount of onset time,” Butler says. “And every minute that you're not working on a film when you're on set is incredibly expensive, especially a film at that level.”

Maybe Leto can get away with those things on the set of other movies, but superhero movies are finely tuned operations.

Leto is clearly lying in one of these quotes. Butler offers an explanation that makes perfect sense, especially in the wake of the media frenzy caused by the Morbius bathroom break ordeal. “He's going, so over the top, doing all these extreme things that really feel like more driven by personal vanity and PR than they do the needs of the actual project.”

“It just seems unnecessary to me and a little bit silly.”

Maybe Leto truly just made up the pranks to make headlines, or he simply denied his actions later in shame. Either way, there’s a reason stories of the extreme lengths actors go to for a role are so gripping to us.

“A lot of what acting actors do is mysterious. Like a lot of what actors do is like: Well, I sat there with the play. I took some notes in the play and I worked on it for a little bit. If you talk about it that way, acting's actually very boring,” Butler says. “This kind of process gives actors like an easily quantifiable thing that they can discuss.”

So while Jared Leto’s actions may make headlines, they may not always make the best performances. For Butler, whatever Leto is doing sure isn’t Method acting, and it probably isn’t needed for the performance.

“It just seems unnecessary to me,” he says, “and a little bit silly.”

Morbius is now playing in theaters.