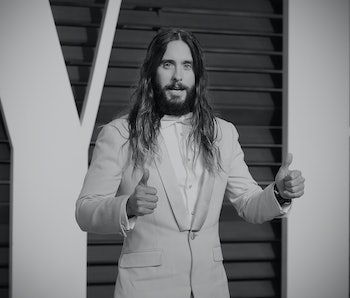 Jared Leto has done almost everything there is to do in showbiz. He’s been in teen sitcoms, gotten murdered to the dulcet tones of Huey Lewis and the News, won Oscars, fronted a band in guyliner. Now, he’s stepping into the shoes of one of the most iconic villains in pop culture: the Joker.

His path was winding. If he’s not a vampire — because seriously, the dude has not aged in 20 years — he has, at least, proven himself to be something of an acting immortal.

Early ‘90s: the teen sitcom era. In which he plays My So-Called Life’s Jordan Catalano, the love interest with just the right amount of sensitivity buried beneath artfully disinterested nonchalance and a bad boy attitude — not to mention, flowing locks worthy of an Herbal Essences commercial.

What can he carry from this to the Joker? Well, nobody said the Joker can’t have shiny flowing hair. Nonchalance is also key to his rumored love triangle with Harley Quinn and Deadshot. And though the Joker isn’t a heartthrob, he gets people’s blood pumping in a way that isn’t dissimilar from Jordan Catalano.

Late ‘90s: Angel Face. In which he takes the teen sitcom bad boy a step further by being a misguided angelic young guy who, along with “his name is Robert Paulson”, becomes a tragic casualty of Fight Club’s Project Mayhem.

What can he carry from this to the Joker? Dyed eyebrows. The Joker doesn’t have time for eyebrows, and neither does Angel Face.

Early 2000s: Requiem for a Dream In which he plays a heroin addict with a doomed relationship with everyone in his life: his mother, his girlfriend, his best friend, his left arm …

What can he carry from this to the Joker? The Joker can be read as a tragic character when he’s not wreaking mayhem. Heath Ledger approached this territory with his Joker’s constantly changing story of how he got his scars. Leto’s Joker will be appearing alongside his girlfriend Harley Quinn, who he manipulates and pushed over the brink of self-destruction — just as Harry pushes Marion.

2000: Paul Allen. Arguably Leto’s shining moment, in which he plays a douchey Wall Street yuppie who gets chopped to pieces to the dulcet tones of Huey Lewis and the News while Christian Bale gleefully rhapsodizes about their recording history.

What can he carry from this to the Joker? This might be one of the best cinematic murders of all time: hilarious, disturbing, darkly satirical, depraved. You can’t help but smile as you watch it, even as you flinch and feel a bit guilty, because, well, murder. That’s everything the Joker should be, so if he can channel even a quarter of that spirit, he’s good to go.

2004: Alexander. Leto’s most misunderstood career move, in which he gives a fabulously entertaining performance in this fabulously entertaining historical epic. He plays Hephaestion, Alexander The Great’s companion and lover. Leto and Colin Farrell have no chemistry, but they didn’t seem to notice; as both go for melodramatic broke. This movie didn’t exactly get a warm critical reception, but that’s because critics were looking at it the wrong way. Watch it as a comedy, not a serious historical epic, and you’ll have a blast.

What can he carry from this to the Joker? This scene alone raises so many questions: What accent is Leto supposed to be using? Why is it different from Farrell’s? Why does an Ancient Greek guy use an Irish accent? Why do their wigs look like rejects from a glam rock tribute band? Why is he wearing more guyliner than Captain Jack Sparrow? Similarly, the Joker is a character who lives in questions and ambiguities. Plus, if he can commit this much to a script this gloriously ridiculous, it won’t matter if the Suicide Squad script, penned by The Fast and The Furious scribe David Ayer, can’t hold a candle to Joss Whedon’s Avengers script. A commanding performance demands commitment.

What can he carry from this to the Joker? Well, just look at his face. Plus, the Joker could use some frontman swagger.

2009: Chapter 27. In which Leto demonstrates his willingness to disappear into a role as he gains 50 pounds to portray Mark David Chapman, John Lennon’s murderer.

What can he carry from this to the Joker? Paranoia and general insanity. Plus, if you’re going to gain 50 pounds for a movie you’re also starring in with Lindsay Lohan, now that’s dedication.

2013: Dallas Buyer’s Club. In which Leto won an Oscar for his portrayal of a transgender woman and lost a startling amount of weight, going the opposite route of Chapter 27.

What can he take from this to the Joker? Heath Ledger has him beat for Oscar-winning Jokers, as he won an Oscar for the actual character, but Leto’s Oscar here was much deserved. Sotto voce he conveys more attention than by booming — a good trait for a villain to have.

Whatever you think of Suicide Squad and its other casting choices, with the departure of Tom Hardy, Jared Leto and Viola Davis are the movie’s strongest performers. And whether you admire him or suspect he’s a vampire, nobody can say he’s afraid to take chances. His inclusion in Suicide Squad all but makes the movie a sure thing.

More like this
Science
5 hours ago
NASA InSight shutting down and more: Understand the world through 9 images
By Robin Bea
Science
5.17.2022 8:45 PM
NASA announces the end of its Marsquake-hunting lander
By Doris Elín Urrutia
Science
5.14.2022 1:00 PM
NASA's ailing Mars lander captures the biggest Marsquake yet
By Jeff Nagle
Share: