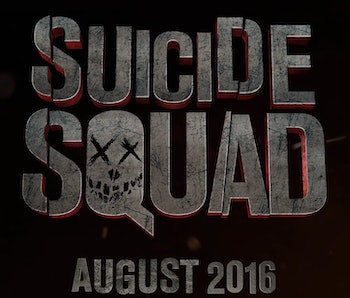 Next summer’s tentpole movie, Suicide Squad, has already been generating a storm of internet debate, memes, and fanboy outrage At the center of the storm stands its most hotly anticipated character: the Joker. Up until now, all we’ve had to go on is a single image of a tatted-up, crazy-eyed, platinum-grilled Jared Leto.

But a new picture of him in costume has finally been revealed. Warning: you may need sunglasses to take this in.

For those who aren’t in the know about Joker history but are scrambling to assign this a snap judgment — because what else are major pop culture events for? — allow us to help. Here’s a trip down Joker memory lane, to better inform you when you pronounce this the Best Joker Ever or coin it the End of Culture As We Know It.

1960s: Cesar Romero’s Clown joker. This incarnation of the joker seems quaint today, but its traditionalist take on the character’s clown roots is fitting for the the gentler part of the ‘60s spirit. Plus, he still had a hell of a cackle.

1970’s: Voiced by Lennie Weinrib, the Joker of the single-season cartoon The New Adventures of Batman was a smirking cartoon who danced on the light side of the character. If it made any kind of statement, it was simply, “leave music and movies to decipher Vietnam and Watergate and growing up; we’re going to entertain the kids with some cartoons.”

1980s: Jack Nicholson’s Joker. Arguably the most iconic incarnation besides Heath Ledger’s, Nicholson’s joker is a debonair ‘20s-style gangster, complete with a bowler hat. He’s Reagan-era Joker, gentlemanly and uncompromising with a stiff smile. Unlike later on-screen incarnations, he genuinely seems to be enjoying himself as he inflicts horrors on the people of Gotham City. Nicholson channels his trademark manic performance to make a Joker who is simultaneously captivating and terrifying.

1990s: Mark Hamill voices the joker in Batman: The Animated Series. Hamill runs with Nicholson’s edge while simultaneously toning it down for kids, in the era in which Nickelodeon and Cartoon Network were at their peak.

2000s: Heath Ledger’s anarchist joker. The only Joker to win major accolades at the Oscars, Ledger’s powerhouse performance as “an agent of chaos” delivers an unpredictable Joker who manages to be both terrifying and hilarious. This incarnation is scarred by Ledger’s tragic untimely death, but even without that, his Joker who just wants to watch the world burn is one of the most iconic characters of the post-9/11 era. He’s a villain you can’t help but sort of root for, among the sentiments that corruption is rampant and the good guys don’t know what they’re fighting for. Now, why so serious?

2010’s: Jared Leto’s version of the psychotic clown is decked out like a cross between a juggalo and a pimp. He seems to be the joker of our modern era of EDM kids and PC culture, Kardashian vapidity and political apathy. As he will be one of the first to appear onscreen with his girlfriend, Harley Quinn, it will be interesting to see how that toxic relationship is portrayed post-Gamergate. Also he doesn’t have eyebrows, because apparently our time is the time of Fuck Eyebrows.