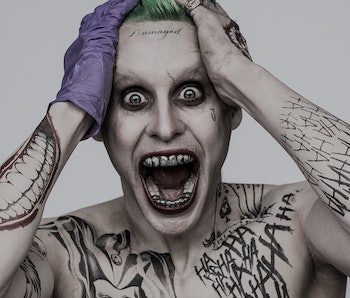 Academy Award winner Jared Leto went full method for his portrayal of the Joker, in the forthcoming Suicide Squad movie. How exactly a person gets into the mindset of such a psychotic madman is unknowable to most non-actors, but Leto’s insane antics on the set of the film give us a glimpse into this method madness. You’ve heard a lot of the details before — the pig, the semen, the love letters to Harley — but we’ve mashed them all up into one harrowing look at the insane stunts Leto (who, from here on, out we will simply call “Joker”) pulled during the film’s production. Buckle up.

Naturally, the moment the Joker arrived on set, he was ready to show off his dedication to the role and his co-workers. While he missed the first few days of shooting, he let his fellow cast and crew know that he was taking the job very seriously, by sending them a nice video message and a dead hog. Why? No idea. What does a pig have to do with anything?

Incidentally, he seems to have avoided gifting anything to Viola Davis, who plays government agent Amanda Waller. This checks out character-wise, as she is an enemy of the Joker, but the omission seems kind of cold in real life.

Then again, Davis made clear that she wasn’t all that interested in such gifts, as she told Entertainment Weekly.

“I did not receive any personally, or else I would have got my husband — who was called ‘Headache Ball’ back in the day when he played football — and I would have said, ‘Take care of the Joker,’” she explained.

He didn’t forget about his potential beau

The cast mates are one thing, but the Joker obviously has a soft spot in his heart for his associate, Harley Quinn (played by Margot Robbie). To her, he gifted a live rat in a black box, along with a love letter. While the contents of the letter are unknown, there is no more romantic gesture than giving someone a rat, so the words he wrote are pretty much irrelevant.

At first, Robbie said she was grossed out by the gift, but came around to appreciating it — even though some insane people told her to kill it. Instead, she bought it a “sweet little playpen, a slide, a hammock and all this stuff,” as she told EW.

Eventually, the little guy (“and his massive ballsack”) was adopted by Guillermo del Toro, who renamed it Vestuniano.

Even so, Robbie was still impressed with Joker’s commitment.

““What he’s doing with the character is so cool,” she told the Daily News. “At first it was kind of confronting (to be up close) but now I’m so used to it, I think if I ever saw him out of makeup now I would be really confused. Actually, I saw him out of makeup once and I was actually petrified of him. I was too scared to go up and didn’t know who that person was, and when he got back into his makeup I was far more comfortable.”

He stopped the crew with his magnanimity

Director David Ayer was so impressed/terrified by the Joker that when asked about what it was like to direct the clown prince of crime, he was effusive in his praise.

“When he steps onto the set the world stops,” Ayer told Total Film. “Everything stops. What he’s done is so powerful, so menacing, and so palpable, you can feel him. The crew stops working and just watches him. I have to get everybody going again because he’s so fascinating.”

And they had been friends!

“But I knew him before. I met him before he was The Joker”, Scott Eastwood confessed to E!. Unfortunately there was no Jared Leto on the set of Suicide Squad, and as a result Eastwood was too afraid to approach the neon-haired devil.

But impressed Will Smith

Smith, on the other hand, gave kudos to Leto for his commitment.

“He went full Joker. He really set the tone. He wasn’t playing with it,” he told E Online. “He was dead serious as an actor. He was going in and he was 100 percent going into this character.”

In an interview with ComicBook.com, Karen Fukuhara, who plays Katana in the film, explains that each time she approached the Joker, this is how their conversation went:

The Joker clearly worked tirelessly behind the scenes to ensure everyone knew he was the real deal. We can only hold our breath to see this insanity for ourselves on the big screen when Suicide Squad releases on August 5th.

More like this
Entertainment
Sep. 21, 2022
You need to watch DC’s most underrated movie of all time on Netflix ASAP
By Eric Francisco
Entertainment
11 hours ago
Hellraiser release date, time, plot, cast, and trailer for Hulu's horror reboot
By Claire Fox
Entertainment
22 hours ago
Rings of Power Season 2's release date may be even worse than you thought
By Jake Kleinman
Share: