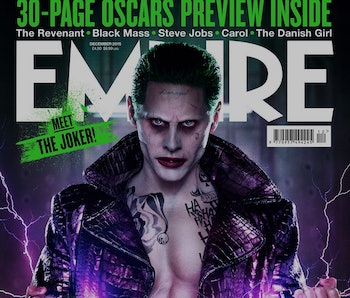 In a continued effort to prove that he is the real-life version of Robert Downey Jr.’s character in Tropic Thunder, Jared Leto has taken method-acting as The Joker a little too far. First, there were reports of Leto serial-killer gifts to his Suicide Squad costars, including a dead pig. Viola Davis told Vanity Fair

He did some bad things, Jared Leto did. He gave some really horrific gifts. He had a henchman who would come into the rehearsal room, and the henchman came in with a dead pig and plopped it on the table, and then he walked out. And that was our introduction into Jared Leto.

Jared Leto: the co-worker you definitely want to invite to your next office party. Next, we will presumably hear reports of Leto sending used merkins.