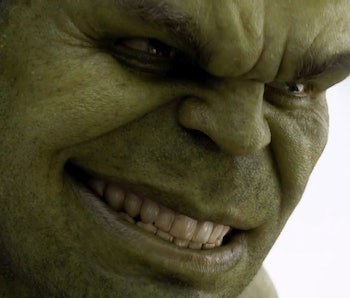 The hierarchy of power just changed in the Marvel Cinematic Universe. In a She-Hulk: Attorney at Law finale mostly focused on She-Hulk herself, Marvel still managed to sneak in one major revelation that could shape the future of the MCU. We’ve got some major spoilers to discuss so let’s dive in.

Major spoilers for She-Hulk’s finale below.

At the very end of She-Hulk, after Jennifer Walters takes down Intelligencia and confronts Kevin Feige himself (who turns out to be a supercomputer called K.E.V.I.N.), Bruce Banner returns for one more twist. After leaving for Sakaar in Episode 2, the original Hulk shows up at a Banner family dinner with a surprise: his son Skaar.

Bruce introduces Skaar, played here by Wil Deusner (Stargirl). We get literally zero information about Skaar’s origins or why he’s here on Earth. But between the comics and some other clues, we can make some very educated guesses.

Who is Hulk’s son Skaar in Marvel?

Skaar was first introduced to the Marvel comics in World War Hulk #5 (November 2007). He’s the son of Bruce Banner and Caiera, a member of the Shadow People of Sakaar who becomes Hulk’s wife during the Planet Hulk storyline.

Skaar has pretty much all the same powers as Hulk, with the exception of Bruce Banner’s extreme intelligence. However, thanks to his mother, he also has “Old Power,” which gives him the ability to control earth and stone (including lava) by communicating with the planet. He can also transform into stone himself and is able to see into the past in some cases.

After showing up in World War Hulk, a crossover event charting Hulk’s revenge on the Illuminati after they exiled him to the planet Sakaar, Skaar played a notable role in several major Marvel events. He and his father even assembled a team of Avengers at one point. Later on, he worked with Captain America to infiltrate the Dark Avengers to take down the evil imposters led by Norman Osborn.

While any of these stories could lend itself to a new Marvel movie or Disney show, the She-Hulk finale does offer a few major clues.

When She-Hulk confronts K.E.V.I.N. he starts talking about Bruce Banner’s big reveal before she cuts him off, saying, “Save it for the movie.” In that same scene, Jen asks about Season 2 and K.E.V.I.N. responds, “See you on the big screen.” This is played off as a joke, but it seems like a given we’ll see She-Hulk in a Marvel movie eventually.

The most likely scenario is that Marvel will give us some sort of variation on the World War Hulk storyline. While we don’t have all the pieces to replicate that comic book event, there’s enough here between Hulk, She-Hulk, and Skaar to tell an interesting story and slap the World War Hulk name on it.

Rumor has it World War Hulk may actually be a Disney+ miniseries, though the recent decision to move Armor Wars from streaming to cinemas suggests the MCU sees more value in releasing its biggest projects on the big screen. Either way, we definitely haven’t seen the last of Skaar.

She-Hulk is streaming now on Disney+.