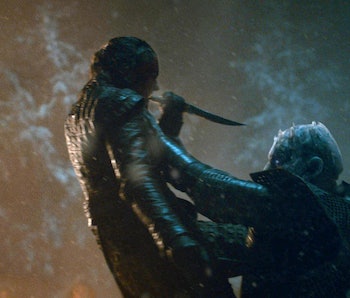 Made of sharp Valyrian steel and sporting a handsome dragonbone hilt, no weapon in Game of Thrones has passed through as many hands as the “catspaw” dagger. Now that the blade has resurfaced in House of the Dragon, it could finally solve one of the oldest mysteries in Westeros — or raise even more questions about the iconic HBO prop.

The catspaw dagger was first seen in Season 1 of Game of Thrones when a Lannister-funded assassin attempted to murder Bran Stark after his infamous toss from the First Keep’s window. Following this incident, the dagger is claimed by Catelyn Stark before it winds up in Littlefinger’s hands.

After betraying Ned Stark and snatching the blade, Littlefinger pockets it for years. He gifts it to Bran in Season 7, who then gives it to his sister, Arya Stark. As the Three-Eyed-Raven, maybe Bran knew that Arya was destined to use the knife to defeat the show’s undead villain, the Night King.

Even though the dagger kept popping up in pivotal scenes, Game of Thrones didn’t reveal much about the weapon (aside from one brief Samwell Tarley Easter egg). But in House of the Dragon Episode 4, the prequel series gives fans some crucial background information on the prophecy-fulfilling blade.

Warning! Spoilers ahead for House of the Dragon Episode 4.

What has House of the Dragon revealed about the dagger?

The Valyrian and Targaryen origins of the dagger were never explicitly confirmed in Game of Thrones, but its background was alluded to at the start of Season 7. As Samwell Tarly reads a book, the page is made easy to view for the sake of fans who are as curious as Sam about Westerosi lore.

The story told in the book is restated in House of the Dragon Episode 4. King Viserys I Targaryen tells Princess Rhaenyra that the dagger, passed from Targaryen ruler to Targaryen ruler, once belonged to Aegon the Conquerer, and Aenar the Exile before him. Before Aenar? No one knows.

However, the most important part of this history lesson is the “Song of Ice and Fire” prophecy that Viserys revealed to Rhaenyra in Episode 1. It’s repeated here, but this time the phrase comes straight from Aegon’s prophetic dream and is hidden in the dagger’s steel:

“From my blood come The Prince That Was Promised, and his will be The Song of Ice and Fire.”

Turns out, the dagger isn’t just a weapon, it’s a record of Aegon’s prophecy and a reminder that winter is coming. “The burden of this knowledge is larger than the throne,” Viserys says, as he hands the responsibility of safeguarding Aegon’s vision down to Rhaenyra.

How does House of the Dragon change Game of Thrones?

This disclosure may change how we view Game of Thrones in two interesting ways. The first is that the lines between The Prince That Was Promised prophecy (also known as “Azor Ahai”) and Aegon’s Song of Ice and Fire dream have been further blurred. It seems more and more apparent that these prophecies are one in the same.

As a refresher, the idea of a forthcoming Azor Ahai was mainly promoted by the Red Priestess Melisandre. She claimed that someone would rise up to defeat the forces of evil as a legendary fighter, a prince who would wield a flaming sword and defeat the White Walkers, echoing the events of the original Long Night:

“There will come a day long after a long summer when the stars bleed and the cold breath of darkness falls heavy on the world. In this dread hour a warrior shall draw from the fire a burning sword. And that sword shall be Lightbringer, the Red Sword of Heroes, and he who clasps it shall be Azor Ahai come again, and the darkness shall flee before him.”

Meanwhile, Aegon’s dream is described by Viserys in Episode 1:

“Aegon foresaw the end of the world of men. It's to begin with a terrible winter, gusting out of the distant North. Aegon saw absolute darkness riding on those winds, and whatever dwells within will destroy the world of the living. When this great winter comes, Rhaenyra, all of Westeros must stand against it. And if the world of men is to survive, a Targaryen must be seated on the Iron Throne. A King or Queen strong enough to unite the realm against the cold and the dark. Aegon called his dream The Song of Ice and Fire.”

Who then did Aegon dream of? Jon Snow, a Targaryen by blood who assists in the termination of the Night King and winds up assassinating Daenerys Targaryen? Or Arya Stark, who uses the dagger to slay the Night King once and for all? Arya isn’t a Targaryen, but maybe that part doesn’t matter as much. House of the Dragon has a chance to clarify the prophecy and clear up one of Game of Thrones’ biggest unanswered questions.

The second notable way the dagger’s inscription changes how we watch Game of Thrones is that we’re now awfully curious about how this relic, paramount to the Targaryens, ends up in the slimy hands of an assassin. Hopefully, House of the Dragon will clear up the mysteries of the Valyrian steel dagger, including who it was first commissioned for and how the Targaryens lost possession of it in the first place.

House of the Dragon airs on Sundays at 9 p.m. Easterns on HBO and HBO Max.