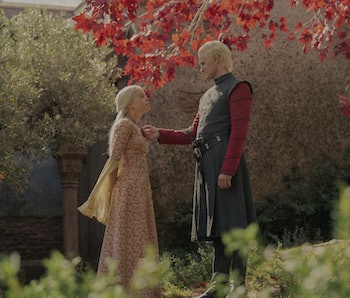 House of the Dragon and Game of Thrones are more cousins than siblings, but in true Targaryen fashion, that doesn’t mean they can’t be close. Despite the fact that House of the Dragon takes place about 200 years before the events of the flagship HBO fantasy series, there are already multiple ties between the two. These include the appearance of Dragonstone and dragon eggs, a Lannister showing up to woo Rhaenyra, and a looming prophecy.

But in a sneak peek of House of the Dragon Episode 4, there’s a glimpse of a scene that solidifies another huge tie to the Game of Thrones, one that was present from the first episodes of Season 1 to the last of Season 8.

In photos released by HBO, we see Daemon (now with a fresh haircut) crowned “King of the Narrow Sea,” Rhaenyra sitting on a throne at what looks like Storm’s End, and, most interestingly, a scene with Viserys and Rhaenyra alone in a room, with Viserys holding a dagger up to a flame.

House of the Dragon and Arya’s dagger

There aren’t that many notable daggers in Game of Thrones history. In fact, there’s only one that carries through the entirety of the series: the dagger used in an attempt on Bran Stark’s life all the way back in Season 1. It’s that dagger that sends Catelyn on a mission to track down Tyrion Lannister and inadvertently kicks off the rift between the Lannisters and Starks.

Much later, Littlefinger gives the dagger to Bran, now the Three-Eyed Raven. Not finding much use for it, he gives it to Arya, who uses it throughout Seasons 7 and 8 to (fittingly) execute Littlefinger after his trial, fight Brienne, and ultimately defeat the Night King and his White Walker army in one fell swoop.

Needless to say, this dagger holds a great deal of meaning, so it wouldn’t be used in House of the Dragon without good reason. We know the dagger has something to do with the Targaryens, as it was seen as an illustration in a book Samwell Tarly reads in Game of Thrones about their penchant for using dragonglass as ornamental decoration for weapons.

This isn’t the first time we’ve seen this dagger in House of the Dragon. All the way back in Episode 1, Viserys was holding the dagger when he first told Rhaenyra of Aegon’s dream/prophecy. Could there be more to the dagger than we know? Does Viserys know the world-saving role it will have in Westeros’ future?

At the very least, its appearance in Episode 4 of House of the Dragon means we’ll get more explanation of Aegon’s “Fire and Ice” prophecy. Much like Episode 1’s scene in the throne room, this episode gives the father and daughter a rare moment alone as sovereign and heir. What else could Viserys have to tell Rhaenyra?

House of the Dragon airs Sundays on HBO and HBO Max.