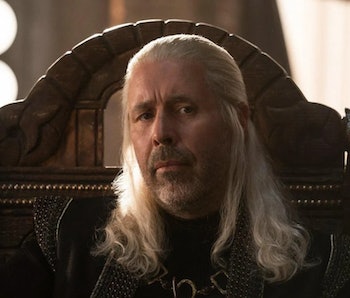 Poor Viserys Targaryen. All he wanted to do was mourn his wife and tell his daughter about old prophecies, but tradition demands that the king take a new wife. By the end of House of the Dragon, Viserys makes his choice. It turns out, he chose poorly.

Spoilers ahead of House of the Dragon Episode 2 (and also the plot the book that inspired the show).

There’s a lot of backdoor politics happening here, so you might be wondering what exactly went down. Basically, there are two families vying for power via the opening that is King Viserys’ empty wedding bed: those are the Hightowers and the Verlaryons.

House Hightower is led by Otto, who serves as King of the Hand. After the queen passes away, Otto makes his move by sending his young daughter Alicent to comfort Viserys. Meanwhile, House Velaryon (the only other Valyrians in the picture aside from the Targaryens) takes a more traditional approach, with house patriarch Corlys formally offering up his pre-pubescent daughter in a move that would solidify Valyrian power.

Going with House Velaryon makes more sense politically, but ultimately, Viserys follows his... heart and chooses House Hightower, announcing the news in one of Episode 2’s final scenes. This will have consequences in both the short and long term. Let’s dive in.

As the final scene of House of the Dragon Episode 2 reveals, Corlys does not take the news very well. He storms out of King’s Landing and promptly meets with Viserys’ power-hungry brother Daemon Targaryen to discuss a new alliance. Corlys wants Daemon’s help to defend his shipping lanes (something the king seems uninterested in), but it likely won’t end there.

In The Princess and the Queen (George R.R. Martin’s book which is being adapted as House of the Dragon), Corlys and Daemon set out on a successful battle campaign to reclaim the territory in question. Corlys also eventually does manage to link his house with Targaryen rule. Unfortunately, as well all know, things don’t go well for the Targaryens in the long run. And once again, that can be traced back to Viserys’ decision in Episode 2.

We’re going to avoid going too deep into spoilers here, but if you want to avoid knowing how this story ends, you should stop reading now because we’re about to get much further into the books than House of the Dragon of the has by Episode 2.

There’s a decent chance you know by now that the main conflict of House of the Dragon is essentially a power struggle between Alicent Hightower and Rhaenyra Targaryen. While Rhaenyra may be the official heir to her father Viserys, Alicent is now the queen, and in the show’s future (presumably after that 10-year time jump), she’s going to have children. Some of those children will be boys, which calls Rhaenyra’s claim to the throne into question.

Viserys’ decision in Episode 2 leads to this power struggle between the two women, which culminates in the Targaryen-on-Targaryen conflict known as the Dance of the Dragons. Of course, it’s possible that if Viserys chose to marry Corlys’ daughter the same thing would have happened, but all we know for sure is that the choice he does make will lead to one of the bloodiest power struggles in Westeros history.

House of the Dragon airs Sundays at 9 p.m. on HBO and HBO Max.