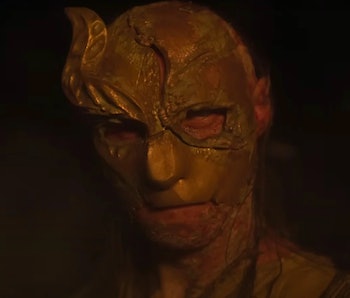 Killer crabs have overtaken the coast of a warzone at the start of House of the Dragon Episode 2. But will they be any match for Corlys Velaryon’s ships and Daemon Targaryen’s dragon, Caraxes, in the coming weeks? Spoilers ahead.

By the end of Episode 2 we see Daemon (Matt Smith) and Corlys (Steve Toussaint) make a pact to conquer the Stepstones, a chain of islands east of Dorne. The Stepstones are strategically important, as much of the sea trade from Westeros to the Free Cities of Essos has to pass through them. Their current owners, the Triarchy (comprised of the three cities of Lys, Myr, and Tyrosh), have driven up tolls to the dismay of Corlys, who serves as Master of Ships on King Viserys I Targaryen’s (Paddy Considine) small council.

Furious with Viserys’ rejection of his daughter in favor of marrying Alicent Hightower (Emily Carey), Corlys ignores Viserys and chooses to handle matters in the Stepstones on his own terms. Daemon, equally infuriated with his brother for snatching his stolen dragon egg and stripping him of his small council titles, agrees to partner with Corlys and vows to return to King’s Landing a victor.

Their biggest threat in the Stepstones is Craghas “Crabfeeder” Drahar, leader of the Triarchy’s armies. While we don’t see Craghas in Episode 2 of House of the Dragon, we have seen Daniel Scott-Smith’s character in promotional materials. He wears a mask to cover a disfigured face, which was presumably burned by Targaryen and Velaryon attacks on the islands.

We also do see the fruits of Craghas’ tyranny at the start of Episode 2. Craghas became known as the Crabfeeder because he ordered pirates and outlaws who dared mess with the Stepstones to be staked on beaches to drown in the rising tide or be consumed by the little critters.

When will we see the War for the Stepstones?

It’s most likely we’ll see the War for the Stepstones, a gruesome feud between Corlys Velaryon and Daemon Targaryen’s armies and the Triarchy’s forces, in Episodes 3 and 4 of House of the Dragon. The first attack begins shortly after Viserys names Rhaenyra (Milly Alcock) his heir, weds Alicent, and bans Daemon from King’s Landing.

Daemon eventually emerges victorious and, though he has no claim to the title, crowns himself King of the Stepstones and the Narrow Sea, an action Corlys eagerly supports.

Daemon’s victory is short-lived, however. The Triarchy soon counterattacks, and fighting resumes until Daemon quietly withdraws to King’s Landing. Waiting for tensions to ease, Daemon causes another rift with Viserys, offending his older brother by asking for his niece, Rhaenyra’s, hand in marriage. While the Targaryens were no stranger to incestuous practices, Viserys is protective of his daughter and doesn’t deem her uncle a suitable match. By the time Daemon is kicked out of King’s Landing again, he abandons his seat on the Stepstones.

The Inverse Analysis— Even with prior knowledge of George R.R. Martin’s A Song of Ice and Fire prequel stories, we have no way of knowing what will make it to the screen in House of the Dragon. However, the ending of Episode 2 sets up combat in the Stepstones, and it’s probable we’ll at least see Daemon’s initial victory, as his claim on the islands triggers his return to King’s Landing and begins a lifelong friendship with Corlys.