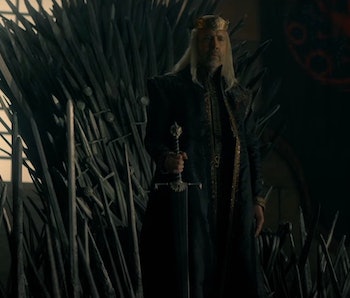 King Viserys I Targaryen was the fifth of his platinum blond line to sit on the Iron Throne.

The 17th and last member of the Targaryen dynasty to hold the title of King was Aerys II Targaryen, father to Game of Thrones fan-favorite Daenerys Stormborn. Only one of them was referred to in Game of Thrones as “The Mad King.” So who was it?

In HBO’s House of the Dragon, the television adaptation of George R.R. Martin’s prequel novellas and novelettes, Paddy Considine plays Viserys, father to Season 1 protagonist Rhaenyra Targaryen (Milly Alcock and Emma D’Arcy), and her half-sibling and future rival, Aegon II Targaryen (Tom Glynn-Carney). House of the Dragon revolves around a pivotal decision Viserys makes that alters the fate of his children and his second wife, leading to one of the most important wars in fictional history: The Dance of the Dragons.

In Game of Thrones, Aerys II is played by David Rintoul in a flashback scene. The show begins about 150 years after the events of House of the Dragon, and features several characters vying for the Iron Throne. Those competitors included Daenerys, the first Targaryen dragonrider in over a century. Though initially presented as a leader full of visionary potential, Daenerys eventually spiraled into The Mad Queen, taking on her father’s unfortunate moniker.

The Mad King was Aerys II Targaryen, not Viserys I Targaryen. But that doesn’t mean Viserys lacks his own share of Targaryen-inherited health issues.

House of the Dragon takes place almost two centuries before Game of Thrones, but the Targaryens began succumbing to madness long before Aerys II Targaryen was ever bestowed the Mad King nickname by the denizens of Westeros.

House Targaryen, like most of the noble families who branched off the Old Valyrian tree, were more susceptible to illness due to their practice of inbreeding. Many of their children didn’t survive to adulthood, while those who did, like Aerys II, often inherited mental health issues.

Aerys’ madness, like many Targaryens, only began to affect his mind later in life. He started his stint on the Iron Throne as a charming and charismatic war hero, but left it murdered by his own Kingsguard, Ser Jaime Lannister. Aerys’ madness began to take hold of him after a fire killed his father and nearly wiped out the Targaryen line. Meanwhile, his sister-wife Rhaella suffered a shocking number of miscarriages and stillbirths, and Aerys grew jealous and paranoid of his successful Hand, Tywin Lannister (Charles Dance).

Aerys officially earned the Mad King title after he murdered all of House Darklyn after Lord Denys Darklyn kidnapped Aerys during a tax dispute. Afterward, Aerys did not leave the Red Keep for years, paranoid that King’s Landing was full of traitors. Self-isolation led to Aerys’ increasing mistrust of the Lannisters, a penchant for fiery murder, and malnutrition due to a fear of being poisoned. Aerys even threatened to blow up King’s Landing if his rule were ever challenged.

After meeting the arrogant and brash Prince Daemon Targaryen (Matt Smith) in Episode 1, House of the Dragon viewers may wonder if the Mad King they’ve heard referenced so often in Game of Thrones is, in fact, this punk. Read ahead for answers, but we’re in potentially major spoiler territory here.

Daemon, brother to King Viserys and eventual uncle-husband to Princess Rhaenyra Targaryen, makes some questionable choices. First, he mismanages his roles as the Commander of The City Watch and Master of both Coins and Laws, and later he makes some more concerning decisions during his multiple exiles from King’s Landing. However, he doesn’t go mad in any of George R.R. Martin’s work.

Daemon is vicious, manipulative, and a flat-out scoundrel, but his cruelty is always strategic, not the product of a mental breakdown.

Does Viserys I Targaryen go mad?

Is Rhaenyra’s dad just another Mad King? In the George R.R. Martin writings where King Viserys is mentioned, he doesn’t succumb to madness. Viserys inherited a secure throne and wound up ruling Westeros in a time of prosperity and relative peace. He was remembered as a king who, while not strong, was reasonable, amiable, and stood by his convictions.

Viserys’ destiny may have been altered for House of the Dragon. However, from what we’ve seen in Episode 1, Viserys remains true to his literary description, except for one important departure: Viserys appears to be ill with a flesh-eating disease. Visually, the sickness doesn’t look like grayscale, a dermatological affliction that impacted several Thrones characters, so it could be a new malady.

Will Viserys I Targaryen become a mad king way before The Mad King? We wouldn’t bet on it, but there’s only one way to find out for sure.

House of the Dragon airs on HBO on Sunday nights.