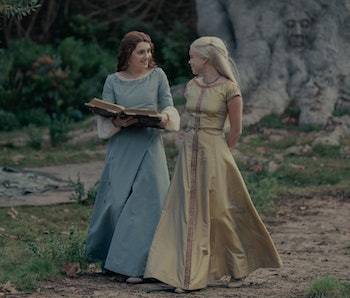 It’s only been three years since Game of Thrones ended, but it feels like a lifetime. That’s partially because we’ve all spent the last three years trying desperately to forget about the events of GoT Season 8, but it’s also because a lot has changed culturally since Dany kind of forgot about the Iron Fleet.

Now, the world of Westeros has returned, with one notable change.

House of the Dragon is both like and unlike anything you’ve seen come out of the ferocious medieval-fantasy world created by George R.R. Martin and spun to life for HBO.

The prequel series starring Milly Alcock and Emma D’Arcy as Princess Rhaenyra Targaryen (the first woman to sit on the Iron Throne), doesn’t skimp out on the sword-clashing or skin-showing we came to expect from Game of Thrones. However, it does one thing starkly different than its predecessor: female royalty is at the forefront of it all.

House of the Dragon is partly made for fans of Game of Thrones, but it also feels like HBO’s response to the enduring popularity of Netflix’s The Crown, Hulu’s The Great, and Starz’s own line of book-to-screen adaptations focused on princesses and queens (Becoming Elizabeth, The White Princess, The White Queen, The Spanish Princess).

The lens of House of the Dragon is squarely on House Targaryen and the capable women who lead to the peak of the Targaryen dynasty in Westeros, as well as the simpering men who, eventually, plunge it. These events take place roughly 200 years before Daenerys Targaryen became the Mother of Dragons and tried to claim the Iron Throne for herself. And while Game of Thrones was full of powerful women, House of the Dragon takes it even further by giving these characters more depth and importance than ever before.

The women of Westeros

For every Joffrey or Ramsey in Game of Thrones, there was another man whose heroism balanced out the grotesquerie (from Gendry and Sam to most of the Stark boys). But if you were a fan of the male characters in Game of Thrones, this prequel may leave you disappointed. The men here are all incompetent and trigger-happy (at least so far). The women of Westeros have no choice but to step up.

House of the Dragon’s two female protagonists, Rhaenyra and Alicent (Emily Carey and Olivia Cooke), are allowed to be heroes (and villains) in their own right without being portrayed as entirely good or evil. These women are written with far more nuance than the women of Game of Thrones, and their platonic relationships with other women are given greater emotional depth. That may make some moments of House of the Dragon veer into soap opera territory, but nevertheless, they are critical for robust characterization.

This isn’t to say that there weren’t strong women in Game of Thrones— Arya Stark (Maisie Williams) is a prime example —but House of the Dragon’s female characters are more believable because they’re written to have both the capacity to be a sparkplug and to be vulnerable, simultaneously. Rhaenyra and Alicent are allowed to embrace their femininity while being tough, a duality that is evident in Episode 1 and carries on through the series. Rhaenyra is more than her dragon and her birthright. Alicent is more than her title and her followers.

Arya, Daenerys, and even Cersei (Lena Headey) and Sansa (Sophie Turner) weren’t afforded such depth. This may have been because there were simply too many characters in Game of Thrones competing for screentime. As the story went on, Cersei got more evil, Daenerys had more delusions of grandeur, and Arya’s interest in swords and vengeance evolved into supernatural ninja antics to achieve revenge. Only Sansa has a drastic change of heart, maturing into a less naive and more cunning woman passionate about restoring order to Winterfell.

It may be premature just one episode in, but House of the Dragon’s female leads are already well on their way to surpassing the complexity of the Game of Thrones predecessors.

Expanding the Game of Thrones audience

Having better-written women at the forefront of your television series (and its marketing materials) can bring in the eyes of predominantly teenaged-to-young-adult women viewers who may have not watched Game of Thrones because it was marketed as more of a “guy’s genre show.” To be clear, GoT did attract tons of female viewership, but the series was often promoted as being for men who like prestige medieval fantasy, sex, violence, and zombies — not necessarily for women who like those things, too.

The graphic brutality against women being shown on-screen in numerous episodes also steered many potential female viewers away from Game of Thrones, whereas George R.R. Martin himself has confirmed that House of the Dragon will not have explicit portrayals of sexual violence.

House of the Dragon, then, can serve as an excellent introduction to the franchise as a whole for audiences who may not have had a character that they could relate to on Game of Thrones.

Sure, none of us have a pet dragon, but the experience of living in a man’s world and having the pressure to work twice as hard to prove oneself? Every girl knows that.

House of the Dragon premieres Sunday on HBO.