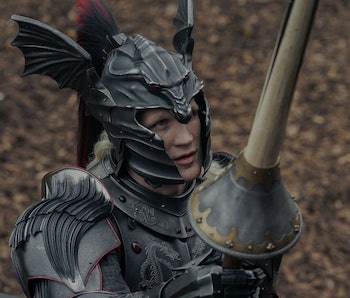 Game of Thrones gave us King Joffrey Baratheon, one of the most hateable villains in television history, but in House of the Dragon, the roles are a little more subtle. Petulant, arrogant, and possibly the unfortunate result of inbreeding, Daemon Targaryen (Matt Smith) is the primary villain of HBO’s new GoT prequel, but he’s far more complicated a figure.

Daemon Targaryen is one of the most prominent figures in The Dance of the Dragons, the Targaryen-versus-Targaryen conflict House of the Dragon is set to explore. Daemon is a dragon rider, warrior, and prince, and he’s one of the most complex and compelling members of the series’ sprawling Targaryen dynasty. He also, notably, wields a Valyrian steel sword named Dark Sister

With all that in mind, here’s everything Game of Thrones fans should know about House of the Dragon’s Daemon Targaryen.

Who is Daemon Targaryen?

Daemon Targaryen is the second son of Prince Baelon Targaryen and the younger brother of King Viserys I Targaryen (Paddy Considine), who holds the Iron Throne at the start of House of the Dragon. As the show’s first episode establishes, Daemon is charming and talented, but also arrogant and incredibly ambitious. Over the course of his life, he’s the husband to three different women, including Lady Rhea Royce, who is briefly mentioned in House of the Dragon’s premiere.

Unfortunately for him, Daemon has always had a bit of a difficult relationship with his brother, Viserys. Part of that is due to Daemon’s own impulsive nature. However, it should be noted that Daemon’s relationship with Viserys has also been repeatedly impacted by his rivalry with his brother’s Hand of the King, Otto Hightower (Rhys Ifans), which fans get just a taste of in House of the Dragon’s first episode.

Otto’s distrust of Daemon has led to the latter holding multiple governmental positions during his brother’s reign, including master of coin, master of laws, and the commander of the City Watch. If it wasn’t already made clear enough in the House of the Dragon premiere, Daemon did particularly well as the commander of King’s Landing’s City Watch, too. Not only was he the first commander to give the members of the City Watch their now-iconic gold cloaks, but he also made the guardsmen themselves brutally effective.

What is he known for?

Daemon accomplishes many things throughout his life, but most of his biggest achievements have yet to come in House of the Dragon. Indeed, now that he has been essentially banished from King’s Landing by his brother, Daemon is free to team up with Lord Corlys Velaryon (Steve Toussaint) for a mission that will dominate a portion of his life.

More than anything, though, Daemon’s desire to reign and remain Viserys’ heir is what ultimately defines his life. It’s why he reacts so hostilely when Viserys names his daughter, Rhaenyra (Milly Alcock), as his heir, which is a decision that effectively ensures that Daemon will never be the next in line for the Iron Throne.

It’s also his desire to rule that leads Daemon to make a decision that, ultimately, only creates an even greater gap between his brother and him. While that decision is best left unspoiled for all the non-Fire & Blood readers out there, it’s worth noting that the seeds for it have already been planted in House of the Dragon.

Who does he side with in House of the Dragon?

The Dance of the Dragons is a Targaryen civil war that breaks out when Rhaenyra Targaryen’s claim to the Iron Throne is challenged. The conflict that follows splits the Targaryen dynasty in two and forces its allies and the houses of Westeros to choose sides between Rhaenyra and her opposers. Those who support Rhaenyra’s claim are known as “the blacks.”

Without spoiling anything, the House of the Dragon premiere does a good job of setting up where Daemon Targaryen’s allegiances will ultimately lie during the Dance of the Dragons. Based on his actions in House of the Dragon Episode 1, it should also go without saying that Daemon proves to be a powerful force throughout the series’ central Targaryen-centric conflict. In fact, his story ultimately leads to what is arguably one of the most epic moments in the history of Westeros, but we’ll let you wait to find out exactly what that is.

For now, just know that Daemon Targaryen is one of the most interesting characters that House of the Dragon has to offer. He’s someone who, for better or worse, will continue to alternate between being a hero and villain with practically every move he makes.

New episodes of House of the Dragon air Sundays on HBO.

This article was originally published on Dec. 12, 2021