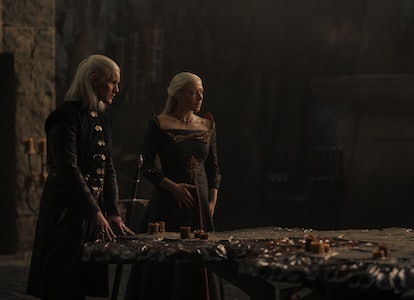 House of the Dragon wrapped up its 10-episode first season with a scene fans have been waiting for: a dragon dogfight. After now-Queen Rhaenyra mulls whether she has the resources to stand against the Greens, her son Lucerys visits Storm’s End to convince House Baratheon to support her.

There, he finds Aemond Targaryen and his massive dragon, Vhagar. When Lucerys tries to depart on his own dragon, Arrax, Aemond takes to the sky on Vhagar and begins a dangerous pursuit. Aemond has no desire to murder his nephew, which would force their families into open conflict. He only wants only to terrify him. However, both dragons take matters into their own claws and ignore the commands of their supposed masters. Arrax blasts Vhagar with fire, and Vhagar responds by snatching Arrax out of the sky and ripping the dragon to shreds, slaying Lucerys in the process.

It’s quite the note to end Season 1 on, and it only gets more heartbreaking the more you think about it. Lucerys was only at Storm’s End because Rhaenyra hoped to gain the support of House Baratheon. Earlier in the episode, Corlys Velaryon questions her thinking by saying, “Hope is the fool’s ally.” Rhaenyra learns that lesson when her wishful thinking costs her a son.

Meanwhile, Andor focuses on Cassian Andor, the martyred revolutionary who sacrificed himself to bring the Empire’s plans for a superweapon to Princess Leia. Much like Rhaenyra, he’s weighing his options about whether personal interference is necessary as a rebellion plots to overthrow everything he knows. But unlike House of the Dragon, in which two powerful groups are vying for power, Andor is part of a small rebel uprising fighting back against a massive fascist empire.

Hope may be the fool’s ally, but it’s the only ally the Rebellion has at this point in the Star Wars timeline.

In the latest episode, we see the aftermath of the Aldhani heist. Cassian makes a clean getaway, but Episode 7 ends with its own twist. He’s arrested, not for his part in the theft, but for simply looking at a security officer the wrong way while a crime was committed nearby. Because the heist has heightened security measures, he gets slapped with a six-year sentence instead of six months.

While these two shows have different perspectives on power dynamics, they both address the same dilemma. Is it worth sacrificing your personal peace to contribute to a greater cause, or is it smarter just to lay low and let things happen as they happen? And is a fight worth fighting if innocent people will be hurt to advance your agenda?

In their latest episodes, both main characters have this decision made for them. Andor is falsely imprisoned, and Rhaenyra loses her son. Now there are only two things left to do: fight and hope.

Hope is the fool’s ally, but to quote Cassian Andor, “Rebellions are built on hope.”

House of the Dragon Season 1 is now streaming on HBO Max.