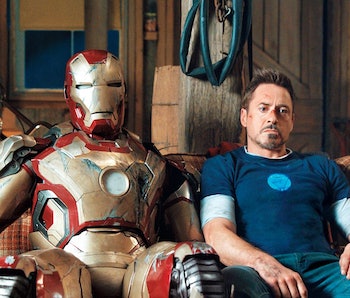 Unlike most Marvel films, Shang-Chi and the Legend of the Ten Rings can stand on its own.

Set to hit theaters at the end of this week, the new blockbuster focuses largely on characters totally new to the Marvel Cinematic Universe; consequently, Shang-Chi is a rare MCU title that requires little-to-no pre-existing knowledge of the films that came before.

That said, it wouldn’t hurt to revisit some past Marvel titles before heading into the theater to see Shang-Chi this weekend. And when it comes to which title to put at the top of your watchlist, the answer is clear: it’s 2013’s Iron Man 3.

Why? Iron Man 3 not only introduced a warlord named “The Mandarin” but also brought the organization known as the Ten Rings into the fray — even though it did so in a deceptive manner.

Iron Man 3 picks up after the events of 2012’s The Avengers and follows Robert Downey Jr.’s Tony Stark as he grapples with his lingering trauma from the Battle of New York. At the same time, a mysterious figure known only as “The Mandarin” (Ben Kingsley) begins broadcasting his crimes live on television. When Tony becomes the villain’s newest target, he’s forced to reexamine his methods and superhero lifestyle.

As anyone who has seen Iron Man 3 can attest, the film’s plot is more complicated than that synopsis makes it sound. Written and directed by Shane Black, the film is as subversive and comedic as the filmmaker’s other titles, including Kiss Kiss, Bang Bang and The Nice Guys. It also remains one of Marvel’s most divisive films, largely because of the way it first appears to adapt comic book entities like The Mandarin and the Ten Rings.

However, while many fans remain dissatisfied with the film’s villains, Marvel has done plenty to build off the events of Iron Man 3. That process began with the studio’s 2014 one-shot, All Hail the King, which picks back up with Ben Kingsley’s character. Without spoilers, this makes for an unexpected follow-up to Iron Man 3 and concludes with a twist that paves the way for Tony Leung’s Wenwu and the reintroduction of the Ten Rings in Shang-Chi.

While Marvel has done its best to correct many of the mistakes it made in Iron Man 3, the studio has done so without outright erasing anything that happened. That means that, while Shang-Chi does ignore many elements of Iron Man 3, it also acknowledges the subversive way in which the film ended up using both the “Mandarin” and “Ten Rings” monikers.

As a result, we recommend revisiting Iron Man 3 and All Hail the King, both available to stream on Disney+. Together, they tell the only MCU story that Shang-Chi connects to in any tangible way; knowledge of what happened in those two titles will prevent any confusion that might arise during certain moments of Shang-Chi.

Of course, it should also be said that Shang-Chi is a much stronger Marvel film than Iron Man 3. Nevertheless, rewatching the latter makes the former’s accomplishments that much more impressive.

Iron Man 3 and All Hail the King are streaming now on Disney+.