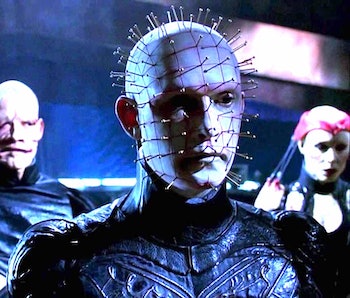 There are two types of people: People who love Hellraiser, and people who have never seen Hellraiser. From the outside looking in, this 10-movie franchise may seem like a paper-thin excuse to watch a guy with nails in his face torture random people, but it's actually one of the best scary sagas around.

Hellraiser began as a sharp, low-budget thriller about adultery and vengeance from beyond the grave (plus some extra-dimensional monsters obsessed with testing the limits of pleasure and pain — mostly pain). It was directed by acclaimed author Clive Barker based on his own novella The Hellbound Heart after he expressed disappointment in how previous adaptations of his work. From there, the movie spawned nine sequels (with mixed results), plus a series of books and graphic novels exploring the adventures of Pinhead and his fellow Cenobites.

Now there’s a version of Pinhead coming to our television screens, courtesy of HBO. Here's everything we know (or don't know), from when the show might arrive to who's involved in the production.

When was HBO’s Hellraiser series announced?

In 2020, HBO announced plans for a new series exploring the story of the Cenobites (former humans whose obsession with gratification has transformed them into disturbing monsters). Then, in October, we learned that Clive Barker had returned as executive editor.

Barker said in a statement (via Deadline) he was “delighted the Hellraiser mythology is seeing a new life. It’s time the stories went back to their roots. I’m eager to bring to a new audience the most powerful and ancient elements of horror: the darkest evil invading our human lives and how we must find in ourselves the power to resist it.”

When will HBO's Hellraiser series premiere?

The series could premiere as soon as 2022. With the script already in development, the Hellraiser show still needs to find its cast. And once it does, being able to film in the midst of the coronavirus pandemic may mean it’s a while before we see the series.

Is there a trailer for HBO's Hellraiser series?

Sorry, but there won't be a trailer in a while. In the meantime, you can always rewatch the movies. The first one is currently streaming on Shudder, while Hellraiser II is available on Hulu.

The show is being written by Mark Verheiden and Michael Dougherty. Verheiden's credits include Battlestar Galactica, Daredevil, and Heroes. Dougherty worked on X-Men United, Godzilla: King of the Monsters, and Trick r’ Treat. In other words, these two have some serious experience when it comes to action, sci-fi, and horror.

However, even more exciting is the news that David Gordon Green will direct the pilot along with several other episodes. Green is best known for directing the 2018 Halloween reboot and its 2021 sequel Halloween Kills. After seeing how he reimagined one horror icon, we can't wait to see what Green will do with this one.

Who else is involved in HBO’s Hellraiser series?

We don’t know any of the cast yet, though hopefully, Doug Bradley will return as Pinhead.

What’s the plot of Hellraiser on HBO?

Again, we don’t know much. However, it sounds like this new series will honor the legacy and tone of the movies. So, if anything, HBO is planning a continuation or at least a spiritual sequel of the franchise, not a hard reboot.

This article was originally published on November 4, 2020