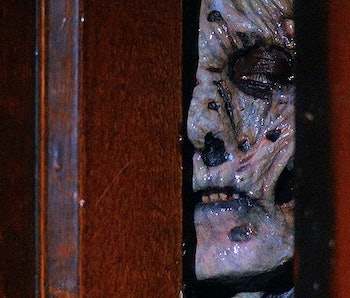 Crucial to this movie is the feel. It’s a tactile film. A hand tries to piece together a chopped face. Fingers sensually touch a mysterious cube. Drops of blood get slow motion. A nail grating on a hand is mixed with aggressive sex and a skinless resurrection. It’s a low budget masterpiece, a testament to the era when practical effects were king. It's also a horror classic that no Halloween movie list is complete without.

This October, you absolutely need to watch Hellraiser, a blood-curdling thriller with hints of science fiction. Not only is it an underappreciated masterpiece, but after October 31, you'll have missed your chance to watch it for free on Hulu (with a subscription, of course).

The premise of Hellraiser is simple. A sexual deviant named Frank purchased a mysterious box, which opens a portal to another dimension populated by Pinhead and the other Cenobites and where pain and pleasure are one in the same. That's the franchise hook, but the original movie focuses on Frank, who immediately is skinned and murdered by the Cenobites. He's soon brought back to life as a monster and sets about convincing his former lover Julia (who happens to be his brother's wife) to bring men into her home and kill them in a bid to rebuild his own body.

The movie’s origin lies in Clive Barker’s short story, The Hellbound Heart. Barker wrote and directed the movie, changing a few items are changed from the original plot — most notably, Kirsty was Larry’s romantic partner as opposed to his daughter. But everything that was key to the story, especially Pinhead and Lemarchand’s box, can be found there.

As for the humans in the film, they are mostly set pieces ready to be tortured. The standout performance comes from Claire Higgins, who plays the British housewife-turned murderer Julia. Higgins came to the role primarily from the theater and BBC historical dramas like Pride and Prejudice and was eager to sink her teeth into such a pulpy, destructive part.

“I’ve done all the nice parts, but I love playing Julia because she’s so evil," she would say later on, quoted in The Hellraiser Films and Their Legacy by Paul Kane. "There’s a great range to the part: I go from being bored and domestic to absolutely vile.”

While Julia’s husband accidentally calls forth the monstrous remains of Frank, her husband’s brother, and her former lover, it’s Julia that takes the lead in psychotic sex romps. She begins luring men back to her home for Frank to murder. After Higgins kills her first victim, her body is all shakes and vague smiles, trying to work through her own feelings. When Frank, who has no skin, calls out to touch her, watching her transform from reluctance to embrace is honestly touching.

Barker was interested in making Julia the main villain of the series, but fans were clearly interested in the Cenobites. How could they not be? In the Guardian piece, Barker describes the pressure to develop a signature look for his film’s monsters, keeping up with the styles of the time: the “film required some design elements that hadn’t been seen before, the equivalent of Freddy Krueger’s fedora, striped sweater and burnt face.” Something iconic for viewers to hold in their mind long after the film had passed.

Pinhead certainly fits the bill. The character was further influenced by Barker’s favorite S&M club, and even though Doug Bradley could barely move after six hours of makeup, his chilling delivery completed the visual look. The joyous anarchy seen in Jason and Freddie’s various killings was gone, replaced by a figure of some sophistication.

Pinhead is open to a bargain, which Barker felt made him more of a threat. In an article on his own website, the author compared his creation to another classic horror villain:

"Part of the chill of Dracula surely lies in the fact that he is very clearly and articulately aware of what he is doing — you feel that this is a penetrating intelligence - and I don't find dumb things terribly scary.”

The film, produced by B-movie king Roger Corman’s New World, can’t escape its zero-budget all of the time. The acting (Higgins and Bradley aside), often feels paint-by-numbers. And the endless sequels would diminish the original's power as they veered deeper into Cenobite mayhem and further from the original's psychological horrors. But looking back at what was possible in 1987, Hellraiser is clearly a wonder.

Hellraiser is streaming on Hulu until October 31.