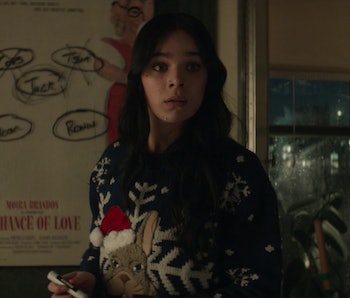 Hawkeye Episode 4 brings Kate Bishop (Hailee Steinfeld) and Clint Barton (Jeremy Renner) closer than ever, only to tear them apart again in its final minutes. But before a surprise appearance from Yelena Belova (Florence Pugh) motivates Clint to break off his partnership with Kate, the Hawkeye duo have another memorable conversation about — you guessed it — trick arrows.

What viewers may not realize is that the duo’s funniest chat in Episode 4 not only happens to be a great Marvel Comics reference, but may also set up an exciting moment still to come for Kate Bishop.

It Comes Back to You — Early in Hawkeye Episode 4, Kate and Clint discuss the need to get their trick arrows back before their next fight. During the conversation, Kate asks Clint if he’s ever used boomerang arrows, to which he incredulously responds, “What? Why would I ever want to use a boomerang arrow?”

“Because they come back,” Kate responds. “If all trick arrows were boomerangs, then we’d have them all.” Clint understandably responds that having the arrows he shoots fly back at him would likely just make things even more dangerous for them.

It’s both a fun conversation and a reference to Matt Fraction and David Aja’s Hawkeye comics run, which the Disney+ series is heavily inspired by. But in the comics it’s Clint who’s a fan of boomerang arrows, and Kate who’s skeptical of them.

That all changes when, in a moment of desperation, Kate is forced to use one of Clint’s boomerang arrows to knock out a Tracksuit Mafia gangster. It works well, surprising Kate and delighting Clint.

Respect the Boomerang — Clint and Kate’s conversation about boomerang arrows works purely as a reference to the comic book story that laid the foundation for so much of what the TV series is doing. So if the scene turns out to be nothing more than an Easter egg for comic book fans, we won’t be disappointed. But it’s possible their conversation also foreshadows a fun moment to come in a future episode.

Specifically, it seems likely that Hawkeye could end up including a moment very similar to the one shown above, in which either Kate or Clint uses a boomerang arrow to beat an enemy. Given both Clint’s attitude toward boomerang arrows and Kate’s series-long obsession with trick arrows, it seems safe to assume it’ll be Kate who builds a boomerang arrow. In fact, we’d be willing to bet that’s what ends up being Kate’s first custom-made trick arrow in the Marvel Cinematic Universe.

For what it’s worth, Kate using a trick arrow she makes on her own — one that Clint thinks is ridiculous — to help them get the upper hand on one of their enemies would be a great moment for her character too. Not only would it prove her ability to pull off the same kind of tricks Clint can, but it would cement her as a worthy successor to him, one who’s open to the kind of ideas he’s not.

The Inverse Analysis — Four episodes into Hawkeye, Kate Bishop has already emerged as one of the best new characters Marvel has introduced into the MCU this year. While her storyline could still take a number of different twists and turns, it’s clear that Kate is here to stay. Indeed, we may very well be calling her Hawkeye by the time 2021 comes to an end.

So here’s to hoping that Kate’s journey includes a moment where, much like she does in the comics, she gets to fire a boomerang arrow into the sky.