“I ask for justice.” 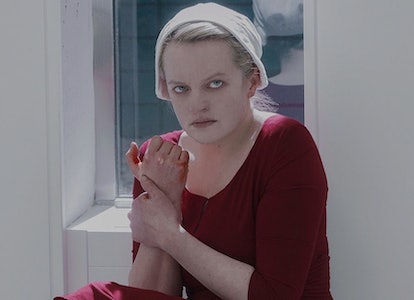 The fourth season of Hulu’s The Handmaid’s Tale aims to amplify that question, as Elisabeth Moss’ Emmy-winning character becomes even more warrior-minded than ever before. How will her quest against the oppressors of Gilead work out, as the pot boils over in Season 4? Based on the trailer for the new year of the show, the answer might shock you.

For those who need a catch-up, The Handmaid’s Tale takes place in a near-future dystopia, where the totalitarian nation Gilead has overtaken America. Moss plays June, the handmaid at the heart of the tale, who fights back against the extremist regime in ways both subtle and overt.

As of Season 4, subtlety is out the window, as evidenced by the trailer.

When last we left the series, June led dozens of “Gilead’s” children out of the country, safely transported to Canada, where many Americans have sought refuge. In the process, June was shot and left for dead back in Gilead. The big question heading into Season 4 is not whether June will survive her present predicament — obviously, she will — but how she will further the fight now that she’s exposed herself to the greater Gilead society.

The Season 4 trailer offers an answer in that regard, with a pretty shocking outcome. As expected, it looks like all-out war is on the menu for this next season of The Handmaid’s Tale, as tensions escalate between Gilead and Canada over the fate of the rescued children. What’s more, the hunt for June is very much on, with so many different players looking to track her down — whether that’s allies like her former lover Nick, or the vengeful Aunt Lydia and other powers that be in Gilead.

But what about June and her final fate? The trailer offers a surprising answer, as multiple points in the narration suggest that she is testifying against Gilead — potentially from the safety of Canada, where so many of the other main characters currently reside, or possibly the safety of the United Nations, with whom she has interacted previously in the series. Regardless, the final moment of the trailer makes it pretty clear that June reaches safety, if only briefly.

“I ask for justice,” she says, speaking before an unseen council, dressed in attire that Gilead would very much frown upon.

So, is it happening, for real this time? Is June actually escaping Gilead? She has had a couple of chances already, whether it was the Season 2 finale, where she was potentially a car ride away from crossing the Canadian border, or the Season 3 finale, where she could have gotten on a plane with the rest of the kids headed for Canada. Now, at least, it looks like June will finally find freedom — but will it be fleeting?

For one thing, even if June makes it to Canada, there’s no way of knowing if she will stay there. As tensions rise between Gilead and Canada, there’s a world where June is returned to the totalitarian nation, either by her own will or that of a higher power.

There’s reason to hope for June’s imminent departure from Gilead, thanks to Margaret Atwood’s sequel novel The Testaments. Set 15 years after The Handmaid’s Tale, Atwood’s recent book leaves June’s fate vague, but theories persist June is still alive and fighting the good fight from Canada — just no outright confirmation of her fate.

Could this be the start of June’s next story, gone from Gilead, leading into Hulu’s planned The Testaments series? Maybe, maybe not. If nothing else, the Season 4 trailer at least offers up some hope for June’s survival in the face of overwhelming adversity — and with hope being so rare in the world of The Handmaid’s Tale, it’s best to savor every ray of it that we get.

More like this
Culture
Feb. 4, 2023
If you loved Nick Offerman in The Last of Us, check out the series he starred in right before the world shut down
By Dais Johnston
Entertainment
Feb. 4, 2023
The Last of Us Season 2 Needs to Fix the Second Game’s Biggest Flaw
By Alex Welch
Entertainment
Jan. 28, 2023
Last of Us Episode 3 release date, time, and trailer for HBO's zombie show
By Claire Fox
LEARN SOMETHING NEW EVERY DAY.
Related Tags
Share: