“Gilead is within you.” 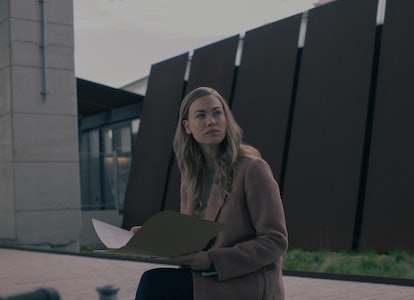 The Handmaid’s Tale Season 4 is nearly upon us. On April 28, the dystopian Hulu series will resume from where it last left off, focusing on the aftermath of June saving dozens of children from a life in Gilead.

But what about the characters other than June? Specifically, what about June’s enemies? One theory surrounding Handmaid’s Tale not only changes the narrative for both Serena and Fred Waterford, but could escalate literally everything, changing the show forever.

Let’s set the stage by looking at the Waterfords’ past.

At the end of Handmaid’s Tale Season 2, Serena gives baby Nicole to June to be carried over the border, truly believing that her daughter deserves the better future she would have there. But halfway through Season 3, she has a change of heart and starts fighting to get Nicole back, involving the Swiss government as a neutral party to broker a deal between the U.S. and Canada.

When that route doesn’t work — and the propaganda videos don’t either — Serena decides to trust America’s own Agent Tuello in a last effort to get her daughter back. Instead, he tricks Serena and Fred into crossing the border and having them arrested.

While in internment, Serena is quick to rat on her husband’s wrongdoings to buy her own freedom. But once Fred finds out about Serena’s plan for immunity, he reveals that Nicole isn’t his biological daughter; she’s the product of June and Nick. What’s more, Fred points out, Serena forced June to have sex with Nick to conceive her.

Now, both Serena and Fred are in hot water — but the old phrase “Gilead is within you” may come home to roost for them both.

At the end of Season 3, fans already started speculating about Serena’s theoretical new baby. Before their capture, Serena and Fred share a rare moment of intimacy. Some eagle-eyed viewers noticed an item in that scene evoking some powerful symbolism: on the nightstand between the twin beds, there’s a lamp oddly shaped like a womb. So, if Serena does end up being pregnant, this is likely the night it happened.

The trailer for Handmaid’s Season 4 suggests Serena and Fred see daylight, if not outright freedom, at some point. And how exactly would that happen? Serena’s pregnancy might be the way, as it speaks to a bigger societal issue within the show’s universe — the fertility crisis — giving the Waterfords some much-needed bargaining power.

Of course, if this pans out the ramifications are huge. In both the show and the books, the fertility crisis is used as a metaphor to highlight how populist and religious politics blame societal problems on people’s personal behaviors. One of the core beliefs behind the creation of Gilead is that God is punishing humanity for its moral corruption by not giving them children. Infertility is blamed on women’s sexual deprivation and high education levels that made them “forget their real purpose.”

Before Gilead, back when she was the author of such pleasant tomes as “A Woman’s Place,” Serena argues that reproduction is a woman’s “moral imperative” and that fertility should be viewed “as a national resource.” So for Serena, if pregnant, she might figure: why wouldn’t it be able to buy you freedom? Or the closest thing to it, at least.

There are some practical considerations surrounding Serena’s potential pregnancy, such as her infertility prior to Gilead’s formation. There’s a provocative way around that.

In Season 2, Agent Tuello addresses the infertility crisis and says “independent American scientists see infertility often originating with the men.” That’s not a fact Gilead would ever accept. If Serena’s pregnant, other women in the world of Gilead may try to become pregnant themselves. That would mean huge changes could be in store for the world of Handmaid’s Tale.

The Season 4 trailer shows Serena and Fred walking outside together. In the scene, they aren’t wearing the civilian clothes they are provided with by the Canadian government, but Serena isn’t wearing her usual Gilead attire, either. She ditches the blue for a new dress that seems to be more of a green or teal shade. Societal stratification through clothes and uniforms is at the core of Gilead’s society, so this can’t be dismissed as a washing mishap or a color correction blunder. The Waterfords’ high-ranking position gives them the power to make changes in Gilead’s laws and rules. Serena could be the first of a new class of “Fertile Wives” placed one step above normal wives, venerated for their miracles.

But putting these women on a pedestal might backfire for the cruel men of Gilead. As the show moves towards its inevitable ending, will Serena’s status, alongside new research, reveal the genetic fault in the men’s infertility, and therefore in Gilead’s system, and break it from within? Will we see a wife uprising, or all the women of Gilead uniting to reclaim their rightful place in society?

In her writing, Handmaid’s Tale author Margaret Atwood never goes as far in the future as to reveal how the fertility crisis gets resolved. But we do know that Gilead’s regime comes to an end within decades of its founding. Time might be up for Gilead soon, then — and maybe for the show as well.