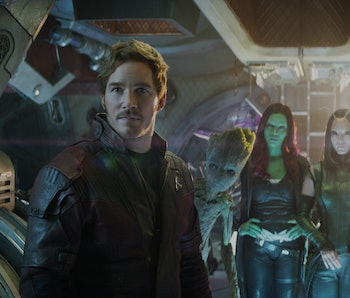 It’s unclear if the MCU franchise will continue after Vol. 3’s release, but if it does, Marvel fans shouldn’t expect it to still be headlined by its current cast.

One Last Trip Around the Cosmos — In a recent interview on Deadline’s Hero Nation podcast, Guardians of the Galaxy Vol. 3 director James Gunn teased that the long-awaited MCU sequel will be “the last time people will see this team of Guardians.” The filmmaker went on to reveal that Vol. 3 is “big; it’s so, so big and dark, and different from what people might be expecting it to be.”

“I just want to be true to the characters, the story and give people the wrap-up that they deserve for the story,” Gunn added. “That’s always a little bit scary; I’m doing my best.”

Gunn’s comments seem to confirm what many Marvel fans have long suspected about Guardians of the Galaxy Vol. 3; that it will say goodbye to some or even all current members of the team.

Saying Goodbye — Unlike most of the MCU’s biggest franchises, the Guardians of the Galaxy films aren’t opposed to permanently knocking off characters. Guardians of the Galaxy Vol. 2 did just that when it climaxed with Yondu (Michael Rooker) sacrificing himself for Peter Quill (Chris Pratt), and several people involved in Vol. 3 have suggested that the film will lean even further into that kind of dramatic territory.

In 2021, Dave Bautista hinted that Vol. 3 will be his last appearance as Drax the Destroyer in the MCU. Shortly after the actor made those comments, Gunn also teased that the third Guardians film will mark the “end of the road” for “this group of Guardians.”

Based on all these comments, it seems safe to say that Vol. 3 will be the last time fans get to see the Guardians they’ve come to know and love team up together. Whether the franchise continues on regardless remains to be seen.

The Inverse Analysis — As always, it’s foolish to try and guess what direction Marvel Studios plans on taking its various characters and franchises. With Guardians of the Galaxy Vol. 3 set to introduce notable characters like Adam Warlock (Will Poulter), there’s certainly a chance the film will both disband its current team and kickstart a new one.

But regardless of where the franchise goes after Vol. 3, Gunn, Bautista, and everyone else involved in the film have made it clear that Marvel fans should be prepared to say some emotional goodbyes when they see it in theaters next year.