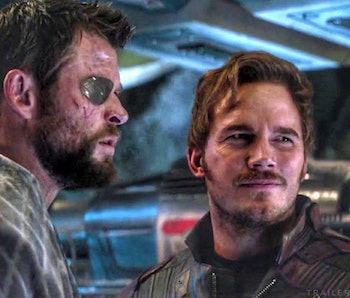 While there’s still a whole lot of mystery surrounding the film’s story at this early stage, we do know most of the key cast members will return, along with director James Gunn, who most recently worked on The Suicide Squad. In the meantime, there’s been loads of speculation about new additions to the Guardians cast. How much of a role will Gamora play? Will Adam Warlock will finally make his long-teased MCU debut?

Here’s everything we know (so far) about Guardians of the Galaxy Vol. 3, including release date, casting rumors, and plot theories from around the web.

What is the official title of Guardians of the Galaxy 3?

Predictably, the third film in the series is titled Guardians of the Galaxy Vol 3. This continues the naming conventions that started with the last film, vibing with the mixtape aspect of the film’s soundtrack.

When will Guardians of the Galaxy Vol. 3 be released?

Guardians of the Galaxy Vol. 3 will release on May 5, 2023. It is currently the latest release date for an MCU film. It was speculated initially that the film would come out in 2022. But considering James Gunn’s work on The Suicide Squad and its spin-off Peacemaker, the Guardians are left to wait until its captain hops from DC back to Marvel.

Is there a trailer for Guardians of the Galaxy 3 yet?

Filming has yet to begin on Guardians of the Galaxy Vol. 3, so no footage has been released. A teaser trailer will most likely drop around a year before or closer to when the film actually premieres. So we might not see any new footage until spring 2022.

What is the plot of Guardians of the Galaxy 3?

No official plot for the third Guardians outing has been released yet.

Guardians 3 will have some big intergalactic fish to fry, as the Guardians recover from the events of Avengers: Endgame. The climactic ending of Phase 3 was pivotal in setting up the next Guardians adventure. First up: the addition of Thor. The “Asgardians of the Galaxy” are already confirmed to be a part of the upcoming Thor: Love & Thunder. Even though Vol. 3 takes place after that film, it wouldn’t be surprising for Thor to link back up with his spacetime friends.

The Guardians will need all the laughs they can get because they still have to deal with the (hopefully temporary) loss of Gamora. Due to some fun time-travel hiccups, Endgame had 2014 Gamora — the version of Gamora who existed before the first Guardians film — show up during the final battle against Thanos. Peter and Gamora were briefly reunited on the battlefield, but she punched him the second he tried to hug her before disappearing. (This version of Gamora never fell for his charms.) At the end of Endgame, we saw Quill trying to find signs of her, to no avail. Don’t expect him to let this go in Guardians 3.

Noted MCU leaker Roger Wardell may have also spilled key information about the Guardians 3 plot in a tweet from May 7, 2019. Wardell wrote, “Rocket’s creator is the High Evolutionary; Drax is in for a big surprise when he discovers his daughter is alive. Rocket also gets a love interest in the form of Lylla. Nebula and Star-Lord will grow into closer friends.” As with all Wardell leaks, there’s been no secondary source to confirm this information, but his earlier tweets about Endgame proved to be surprisingly accurate.

Who will direct Guardians of the Galaxy Vol. 3?

James Gunn will return to direct Guardians 3 and write the script. It’s been a long road back to Guardians, the MCU franchise Gunn infused with his own darkly humorous sensibilities. He was re-hired by Disney after being fired back in July 2018 when past problematic tweets resurfaced online, prompting outcry. The Guardians cast rallied around Gunn, and Dave Bautista even went so far as to threaten to break his Marvel Studios contract as a show of good faith for the director.

Which cast members will return for Guardians of the Galaxy Vol. 3?

Thanks to the magic of an iron-clad Marvel Studios contract, the core Guardians cast members will return for Guardians 3. This includes:

There will also be some familiar returns from the Vol. 2 cast. Elizabeth Debicki will reprise her role as Ayesha, Sovereign High Priestess who created Adam Warlock at the end of Vol. 2, and Sean Gunn, the director’s brother, will again appear as Kraglin the Ravager.

Who is the villain in Guardians of the Galaxy Vol. 3?

No villain has been confirmed for Vol. 3.

Adam Warlock’s arrival, as teased in the Vol. 2 post-credits, has led to speculation he and his creator, Ayesha, will inevitably be the Vol. 3 villains. Ayesha certainly has enough of a motive for revenge against the Guardians, and she has created the perfect weapon to do it.

Summer 2019 saw a great deal of chatter among Marvel fans about the possibility of Zac Efron taking on the role of Adam Warlock, particularly after Bosslogic shared his own rendering of the actor suited up. Subsequent rumors that the actor was “in talks” with Marvel have remained unconfirmed.

Gunn has tried to mitigate any Adam Warlock rumors on Twitter as far back as November 2017 while discussing Vol. 2: “Despite so many people thinking Adam will show up in Vol. 3 that is something that we have never confirmed. Who knows how long it will take him to bake in that cocoon. That said, I love Adam. But the time must be right.”

Are there any more Guardians of the Galaxy Vol. 3 rumors I should know about?

The biggest Guardians 3 rumor floating around as of mid-June 2019 is that Lady Gaga might be up for the role of Lylla, Rocket’s love interest. The outlet Film Updates claimed to break the news via their Twitter account on June 18:

“Lady Gaga is reportedly being considered for the role of Lylla, Rocket’s love interest who is set to make an appearance in Guardians of the Galaxy Vol. 3. This would mark a reunion between Gaga and Bradley Cooper, who voices Rocket, after last year’s A Star is Born.”

There has been no firm confirmation from Marvel Studios, Gunn, or Gaga about this. If Gaga was cast as Lylla, it would indeed mean a reunion between Cooper and Gaga — and the second time they’ve played love interests opposite one another. However, it’s pretty likely this rumor was a byproduct of the feverish Cooper-Gaga shipping that swept the nation after their steamy duet at the 2019 Oscars.

This article was originally published on Sep. 27, 2019