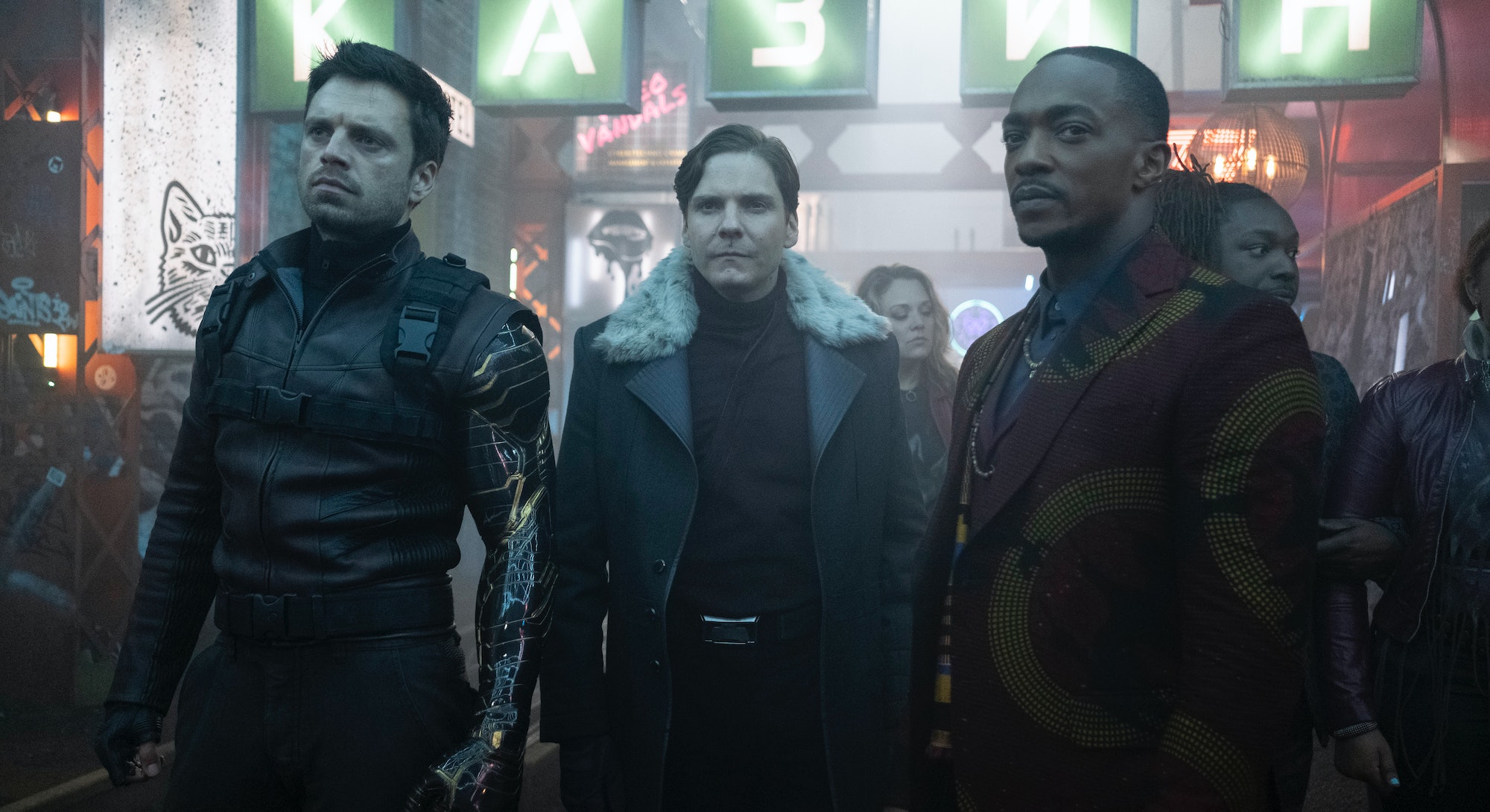 In the DC Universe, the “S” on Superman’s chest stands for “hope.” But in the Marvel Cinematic Universe, another “S” word stands for something else: supremacy.

In The Falcon and the Winter Soldier, bathrobed villain Baron Zemo spends a minute analyzing Karli Morgenthau, a young girl leading a post-Endgame terrorist group called the “Flag-Smashers.” The exact politics of the Flag-Smashers are muddy, but in short, the Flag-Smashers are displaced people who have no home after the Avengers defeated Thanos and blipped half the universe back into existence.

The Flag-Smashers, whose name is lifted from an obscure anarchic comic book villain, evoke the anti-fascist boogeymen cable news uses to scare your boomer parents. But as Zemo points out, there’s little to differentiate the Flag-Smashers from contemporary extreme right-wing terrorism.

“She’s a supremacist,” Zemo tells Sam Wilson. “It’s that warped aspiration that led to Nazis, to Ultron, to the Avengers.” While Sam and Bucky insist on peaceful methods, Zemo continues: “The desire to become superhuman cannot be separated from supremacist ideas.”

It’s important to note it’s not racial supremacy that defines the Flag-Smashers. Note Zemo only says “supremacy” and not “white supremacy.” In typical MCU fashion, The Falcon and the Winter Soldier is grappling with an agnostic sense of supremacy, a more vague definition of power imbalance that glosses over the imbalance of power in systemic racism.

While the series has begun chipping away at the visage of Captain America with Isaiah Bradley, a Black veteran and the only survivor of evil science in which Black men were expendable subjects for the Super Soldier Serum, the MCU isn’t quite there to make a provocative point about white supremacy. (To know Isaiah Bradley’s history requires diving into out-of-print comic books, and it’s TBD if the billion-dollar Marvel franchise is ready to recognize its Tuskegee analog as canon.)

But “supremacy” is not so far removed from “superheroes.” Alan Moore, the acclaimed comic book creator responsible for era-defining work like Batman: The Killing Joke, V for Vendetta, and most of all Watchmen, argues against the rise of the superhero in the 21st century. In a 2016 interview with Brazilian outlet Folha de São Paulo, Moore lamented the popularity of superheroes, as he found the genre’s implicit themes eerily parallel to widespread nationalism. At the time of the interview, Donald Trump had just been elected president of the United States.

“I think the impact of superheroes on popular culture is both tremendously embarrassing and not a little worrying,” Moore said. “While these characters were originally perfectly suited to stimulating the imaginations of their 12 or 13-year-old audience, today’s franchised übermenschen, aimed at a supposedly adult audience, seem to be serving some kind of different function, and fulfilling different needs.”

Moore even said the characters themselves — “largely written and drawn by creators who have never stood up for their own rights against the companies that employ them” — were “cowardice compensators.” His most damning critique came in calling D.W. Griffith’s Ku Klux Klan film Birth of a Nation the first superhero movie:

“I would also remark that save for a smattering of non-white characters (and non-white creators) these books and these iconic characters are still very much white supremacist dreams of the master race. In fact, I think that a good argument can be made for D.W. Griffith’s Birth of a Nation as the first American superhero movie, and the point of origin for all those capes and masks.”

Marvel, DC, and the Watchmen

While Moore didn’t make this connection in his graphic novel, the acclaimed HBO series sequel from Damon Lindelof did so in explicit terms. The show begins in a riff of Superman’s origins on Krypton, now set in the 1921 Tulsa Race Riots. It continues with the show’s Black protagonist, Angela Abar (Regina King), who is inspired to fight crime by a Blaxploitation film hero and joins the Tulsa police (who hide their identities under masks). Unbeknownst to her — and spoilers if you haven’t seen Watchmen yet — the Tulsa Police are as invested in white supremacy and opposed to reparations as the show’s ghost-faced antagonists, the Seventh Kavalry.

Watchmen makes clear the shared DNA of masks, vigilantism, and racial violence. Even if progressive comic creators interpret superheroes as immigrant metaphors, there is still the uniquely and unignorably American history of masked white vigilantes intrinsic to our understanding of men operating outside the law to uphold a status quo.

Moore’s referencing of “Übermenschen” is also no mistake and maybe the clearest line connecting the history of superheroes to the history of white supremacy. Famed German philosopher Friedrich Nietzsche famously conceived of the “Übermensch,” or “superman,” in his 1883 book Thus Spoke Zarathustra. While Nietzsche wasn’t necessarily drafting the first scripts to Action Comics, his Übermensch idea put forward the idea of a futuristic being, a “superior man” who had become enlightened past conventional Christianity.

The fascist origins of superheroes

A 2015 YouTube essay from The School of Life summarized Nietzsche’s Übermensch, saying:

“[Supermen] will make their own values. They’ll be very independently minded ... supermen accept they’ll need to hurt people in the name of great things. They can be selfish in strategic ways. Greatness for them will be about the reform of humanity towards pagan values.”

While Nietzsche was opposed to antisemitism and even nationalism as a principle, his sister, Elisabeth Förster-Nietzsche, an anti-Semite, took control of his works after his death. Through careful editing and even omission of critical pieces of her late brother’s writings, she enabled the name Nietzsche to inform modern fascism. She was a celebrated figure in Nazi Germany. Adolf Hitler was present at her funeral in 1935.

It’s a stretch to say Nietzsche is the grandfather of superheroes. Action Comics #1, which featured the first appearance of the archetypical superhero Superman, published its first issue 38 years after Nietzsche died. But its creators, second-generation Jewish immigrants Jerry Siegel and Joe Shuster, took cues for Superman from Nietzsche’s concepts. “The Reign of the Superman” is a 1933 short story by Siegel and Shuster in which a telepathic villain named “Superman” is a meek man who becomes a powerful being and seeks to rule the world. Through later revisions, a direct homage to Nietzsche exists in modern Superman lore in the villainous billionaire Lex Luthor.

It should be said Siegel and Shuster’s use of the word “Superman” was a case of chasing trends, as Nietzche’s works found posthumous popularity through other media. There was George Bernard Shaw’s 1903 play Man and Superman and Edger Rice Burrough’s 1912 novel Tarzan of the Apes, in which Jane Porter calls Tarzan a “superman.” (Siegel said later in his life that Tarzan was an inspiration on Superman, believing Tarzan to be “the greatest action hero of all time.”)

And so, without the consent of Nietzsche himself, superheroes and white supremacy are linked in an uncomfortable embrace. While the roots of the superhero genre come from the children of immigrants (mostly Jewish, too), the essence of superhero stories is debatably fascistic. Superheroes wear masks to uphold a status quo; so do vigilantes. It wasn’t long ago when the internet embroiled in this question. It started in a Salon op-ed from December 2013 before bouncing around to The Atlantic to Birth.Movies.Death to Vox. Even now, it’s still up for debate.

In 2021 superhero media remains as powerful as ever, and The Falcon and the Winter Soldier is a compelling instance of the juggernauts looking in the mirror. While Marvel has yet to actually draw clear lines from its superheroes to America’s racist past (again, we’re not sure yet where Isaiah Bradley’s story is going and what it contains, but it’s absolutely rooted in Black pain), it could very well go to a place fans may never have expected the expansive MCU go before: truth and the American way.

Read more at our Falcon and the Winter Soldier hub.