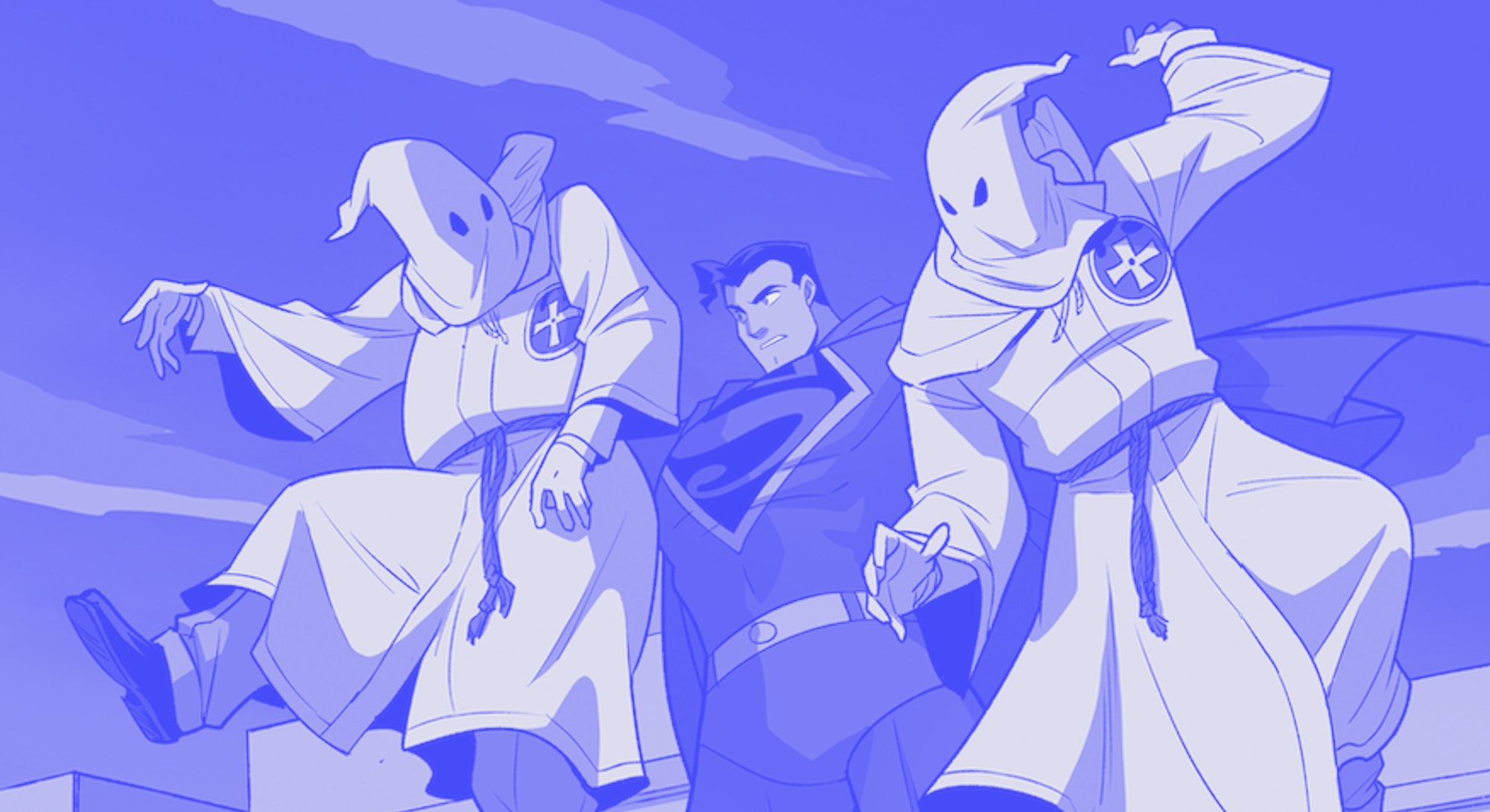 In 1946, Superman changed the world. Almost 75 years later, the Man of Steel might do it again.

In Superman Smashes the Klan, DC’s first superhero rescues a Chinese-American boy when he’s kidnapped by hooded white supremacists. Although the comic from Gene Luen Yang is new, the story is almost as old as Big Blue himself.

“Superheroes, in general, have had a social justice bent,” Yang tells Inverse. “Those early Superman comics, he’s basically a golem. It comes out of Jewish tradition, the golem righting wrongs and beating up corrupt politicians, always fighting for the common man. You can’t escape that.”

The origins of Superman Smashes the Klan lie in “Clan of the Fiery Cross,” a 16-part episode from the 1940s radio serial Adventures of Superman. From June to July 1946, Superman exposed Ku Klux Klan codewords, rituals, and its bigotry — all based on intel collected by activist Stetson Kennedy — before a national audience. The show damaged the group’s reputation and led to a steep decline in membership from which the KKK never recovered.

Yang, a 2016 MacArthur Genius recipient, is a Chinese-American comic book writer whose DC credits include Superman and The Terrifics. He learned about Superman’s part in fighting racism from the 2005 best-seller Freakonomics by Steven Levitt and Stephen J. Dubner. “They bring it up because it had a real-world effect,” Yang says. “For fanboys like me who are criticized for having our heads in other universes, this was a great example of a guy in a cape that had a real, positive effect on the world.”

Unfortunately, the Klan didn’t disappear. Though a fraction of what it was then, “the ideas driving the Klan seem to be making a resurgence,” Yang says, adding that racist violence in Charlottesville, the white supremacist mass murderer Dylan Roof, and other events pushed him to revisit Superman’s original battle with American bigotry.

“Superman Smashes the Klan is my attempt to talk about these modern issues in an old context,” he says.

Superman Smashes the Klan is a three-issue comic adaptation of “Clan of the Fiery Cross,” illustrated by Japanese studio Gurihiru. Originally published in late 2019, it is now available in paperback.

Yang’s reboot adds dimensions the 1946 radio serial was missing, like social politics of immigrant Chinese-Americans and some serious self-reflection from Superman himself. As the Last Son of Krypton discovers his own alien identity, Superman finds much in common with Metropolis’ immigrant community, which also lives between worlds. It’s a story Yang knows well, which in turn makes his Superman seem like the most human character in the DC Universe.

In an interview with Inverse, Yang unpacks Superman Smashes the Klan as prejudice -- spurred by Covid-19 and other events -- makes an uncomfortable return to the mainstream.

How did you feel when you learned of Superman’s historical role in damaging the KKK’s image?

It was really cool to see. As a kid, I was not a Superman fan. I was a Marvel guy. The first comic I had was a Superman comic because I wanted a Marvel comic and my mom wouldn’t buy it for me. She forced Superman on me because he was a Boy Scout.

As I got older, I realized there was a lot more nuance to that character. The more I got to know more about him and the story behind his creation, the more I fell in love. He’s the guy. He’s the original superhero. If you’re a superhero fan, you’re by extension a Superman fan.

How did your lifelong experience as an Asian-American fill out Superman Smashes the Klan?

Out of all the books I’ve done for DC, this one feels most personal to me. [The Lee family] represents different approaches I've had to putting my Chinese heritage together with my “Americanness.”

Sometimes [growing up] I made my Chinese heritage a joke just to be accepted. It’s something that comes up again and again, and it’s a building block of who I am, which I think is true for any immigrant kid. There's a duality in how they see themselves.

The thing that got me to flip on Superman was realizing he is between two cultures in the same way I was. When I was a kid I had a Chinese name at home and an English name at school. I spoke one language at home and another at school. When I see Superman going from the Fortress of Solitude, a very Kryptonian environment as Kal-El, and he goes to Metropolis as Clark Kent, I felt that.

What I found boring about Superman back in the day, I attributed to my parents. My parents were squares. They never wanted to break rules and they were dorks. But as I got older I realized they did that so people wouldn’t question whether they belonged here. They tried to be perfect citizens so no one would question their citizenship. The same is happening for Superman.

It is interesting that the original “Clan of the Fiery Cross” included Chinese-American characters so shortly after World War II. Do you know why the Adventures of Superman show had characters like the Lees?

Chinese families were moving into white suburbs after World War II. This wasn’t easy. Often people threw garbage on their lawns, they got death threats. But they were able to move. Before World War II, they had to stay in Chinatowns. This is mind-boggling when you look at other people of color in the post-war era. African-Americans were not allowed to move, Latino Americans were not allowed.

When Pearl Harbor was attacked, the narrative around Chinese-Americans shifted. America realized China was our greatest asset against Japan. So the story told about Chinese-Americans went from sneaky, threatening criminals to brave, loyal, and patriotic. Because of that, opportunities were open to Chinese that were not to other people of color. And it happened in response to this event overseas that Chinese-Americans did not have control over. Now we’re experiencing something similar. [Covid-19] happened overseas and Asian-Americans had no control over that. Our narrative is shifting again.

What research did you do before writing Smashes the Klan?

I read The Chinese in America by Iris Chang, she has this whole chapter on the post-war era. I read The Unauthorized Biography of Superman by Glen Weldon that talked about what Superman meant in the 1930s and 1940s.

To fill out the Klan I did some unsavory research. I looked up interviews with Richard Spencer and a bunch of folks. YouTube would bring up crazy videos, so I understand how people fall into a rabbit hole. I was looking for the humanity behind that viewpoint. I try this even with villains. I want them to come off as humans. I don’t want them to not be evil, but I want them human, and the only way I know how to do that is look for the kernel of a human concern behind the ideology. Every hateful ideology I’ve encountered, there was something human underneath.

One of the good things I read was Rising Out of Hatred, about Derek Black, who is the godson of David Duke and who turned his back on his family. It was intense but that was an inspiring book I used to fill out the “Chuck” character [in Smashes the Klan].

What was it like writing a classic, old-school Superman?

I love old-school Superman. He has this swagger to him that I think gets lost. He’s humble, he’s kind, but in a fight he knows who he is. I love the way Gurihiru drew him, they drew on the old Flescher cartoons for their designs.

What do you think Superman Smashes the Klan will mean with regards to anti-Asian racism sparked by Covid-19?

Culture is built by stories; culture affects how we treat one another, and we have to be very careful with our stories. Since the founding of America, there have been two streams of thought. One is that America ought to be built on unity, blood, and history, specifically European history. The other stream was that America be built on unity through ideals, a commitment to the future.

I’ve read this conversation between Quakers and George Washington. The Quakers were like, “You gotta do something about slavery. It’s really going to bite your country in the butt.” And he didn’t. He didn’t do what the Quakers asked. Now in World War II, the Nazis built their ideologies on American ideas. There was an American writer named Madison Grant who wrote The Passing of a Great Race that Hitler called his Bible. So when America went to fight Nazis, we’re fighting a version of ourselves.

One stream is obviously the way of the future, where America is unified by ideals. Whether they were conscious of it or not, the writers of Adventures of Superman were writing about that vision of the future.

It seems like we've given up on that vision. We’ve lost faith that we can achieve unity through ideals rather than blood. That’s what I hope readers of this book take away. There's no way we're going to separate into racial pockets. The only way to move forward is to respect diversity. Respect people who are unlike us and learn to live in a community.