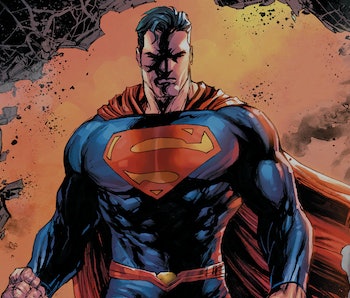 In 2019, Superman is going to square off with an old enemy. And it’s not Bizarro or Lex Luthor, it’s the Ku Klux Klan, in a new comic book written by celebrated Asian-American author Gene Luen Yang.

On Sunday, DC Comics announced the beginning of two new imprints aimed at younger readers: DC Zoom, an imprint focused on middle school readers, and DC Ink, targeted towards a young adult (YA) readership. The imprints are meant to extend the DC Universe beyond the usual crop of comic readers, but one title in particular is going to get the attention of everybody: Superman Smashes the Klan, by Gene Luen Yang, from under the DC Zoom imprint.

As the title implies, the 2019 comic — released as a periodical first, before being collected together — will feature the Man of Steel crush bigotry in the form of the terroristic white nationalist group. “If anyone can make a bold statement with Superman, it is Gene Yang,” DC’s VP for content strategy Michele Wells told The New York Times.

Surprisingly, this won’t be the first time Superman fought the KKK. In a legendary 1946 radio broadcast of the hit series The Adventures of Superman, “Clan of the Fiery Cross” pitted Superman against the group, exposing the KKK’s rituals, secrets, and just plain villainy to a national audience. The broadcast inspired the 2012 nonfiction book Superman Versus the Ku Klux Klan: The True Story of How the Iconic Superhero Battled the Men of Hate by Richard Bowers, which was optioned to become a feature film last May.

Gene Luen Yang is an especially compelling author to write a comic book that unambiguously tackles racism. One of the most prominent Chinese-American authors in comics, Yang has been a frequent Superman writer for years. In 2016, he created Kenan Kong, “the Superman of China,” in DC’s New Super-Man. His other comics, such as American Born Chinese and Boxers and Saints, have been critically-acclaimed and won numerous literary awards.

There is no release date yet for Superman Smashes the Klan by Gene Yang.