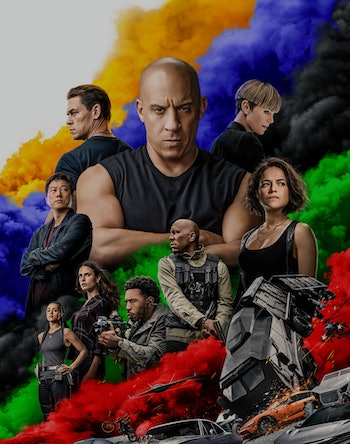 “You’ve got to be kidding me!”

By the time a character yells this late in F9, the highly anticipated new entry in the Fast & Furious series, I expected the film to be suspending my disbelief with practiced ease. Instead, I kept saying the same thing.

Bloated, boring, and frequently baffling, F9 isn’t just a cruddy mess of white noise; it’s a painfully inert film that feels like a bad parody, a $200 million mockery of everything fans love about the series. Watching this ninth entry in a globally acclaimed franchise that, for a time, felt untouchable, one can only look helplessly as a decade’s worth of goodwill tumbles down a hill and bursts into flames like so many sports cars of years gone by.

Even Fast & Furious fans need to finally admit when the haters are right.

As it opens, F9 is about brotherhood. Following 2017’s The Fate of the Furious, Dom Toretto (Vin Diesel) is living a quiet life with Letty (Michelle Rodriguez) and young son Brian until the enigmatic Mr. Nobody (Kurt Russell) sends a distress call to Dom and his tight-knit “family” (Ludacris, Tyrese Gibson, and Nathalie Emmanuel, all series regulars since entering in different sequels). Responding, Dom soon encounters a character no Fast has made mention of: Jakob Toretto (John Cena), his younger brother.

You see, another high-tech doohickey could destroy the world, should it fall into the wrong hands. Gunning for the device are Otto (Thue Ersted Rasmussen), the son of a dictator, and criminal mastermind Cipher (Charlize Theron, returning from Fate of the Furious), who’s secretly pulling the strings. Jakob’s helping them get it, which puts him at odds with big brother Dom.

Running its main plot parallel with flashbacks to 1989, F9 is smart to anchor its biggest story beats around Dom’s relationship with his estranged, equally buff sibling. There’s a grave reason pop culture’s most vocal family man has never before mentioned his own blood brother, and F9’s unraveling of their fraternal fracas is surprisingly thoughtful and carefully grounded.

F9 is smart to anchor its biggest story beats around Dom’s relationship with his estranged, equally buff sibling.

No matter how wild F9 gets or how lost you become in the plot — and lost you’ll surely be, with rocket ships and spies amok — the film never loses sight of Dom and Jakob battling it out at the dramatic center. Their story’s beginning brings the franchise back to its roots in small crimes and street racing, while its conclusion will prove deeply satisfying to anyone with particularly fond memories of 2001’s very first Fast and the Furious.

But that’s about all that’s good about F9, a mostly tragic L for director Justin Lin. The first time he took the reins, on 2006’s Tokyo Drift, Lin turned around a franchise doomed for the Walmart bargain bin, delivering an unpretentious and quietly progressive action saga far beyond its street-racing roots.

The peaks of this franchise remain 2011’s Fast Five and 2013’s Fast & Furious 6, both directed by Lin and brilliant in how their action elevated the series visually and dramatically. Under his watchful eye, the franchise also once enjoyed a reputation to a certain level of technical realism that rivals Mission: Impossible. Tom Cruise hangs onto planes; Fast & Furious throws cars out of them, and the universe remains in balance.

Sadly, F9 finds Lin on cruise control. This time, his staging — some of it still filmed for real — is more cartoonish, paling in comparison to past entries. F9’s set pieces are maddeningly uninspired, with incoherent visual framing and yo-yoing suspense that feels as weightless and immaterial as a fistful of sand.

Whereas the tactile action of Fast Five and Fast & Furious 6 makes both films studies in how much exemplary execution can add to a film’s overall impact, F9 washes over you and disappears before your eyes as invincible characters ping-pong across the screen.

If Fast Five was an entry that left you awestruck, F9 is one that only leaves you wondering how much longer there is to go.

One of F9’s gravest sins is in its mixed messaging. More than once, characters verbally espouse the objectivity of physics. This comes only after those same characters survive a one-on-14 firefight untouched and after a truck’s super-magnet pulls John Cena’s car (and nothing else) over from the other side of a city block. So when a slow-motion climax attempts to rationalize the chances of a character surviving a ride in a Pontiac duct-taped to a rocket engine, the pro-science dialogue rings hollow.

Even when F9 makes an attempt to address how lucky these characters have been — in a terrible scene where the word “superheroes” is teased like a dirty word — the mere acknowledgment of their invincibility does damage to the film’s internal suspension of disbelief. We’ve seen these same characters survive time and time again without so much as a bloody nose, so nothing happening on screen ever feels truly dangerous. It’s as if two maxims are now guiding the scripts: everyone’s hot and nobody gets hurt.

Everyone’s hot and nobody gets hurt.

I wish that were the worst thing about F9, but the floor keeps sinking. One of the most compelling elements of old-school Fast & Furious was Sung Kang’s ultra-cool, melancholic Han, whom audiences always knew was living on borrowed time.

Killed in Tokyo Drift only to come back in subsequent installments through the series’ nonlinear timeline, Han received a proper send-off in Fast & Furious 6. (The whole plot of 2015’s Furious 7 hinged on characters seeking revenge for his murder.)

But in one fell swoop, F9 tanks everything great about Han. Though competently performed — Kang is exciting and deserves to be in better movies — Han’s new backstory, which includes surviving his “murder” and a secret protégé played by Anna Sawai, is easily one of the worst retcons in cinematic history.

The film’s rationale for Han’s return is overcomplicated and illogical while making it obvious the writers bent over backward to avoid science fiction solutions that frankly wouldn’t have felt so outrageous (especially after 2019’s Hobbs & Shaw spinoff paved the way for such high-tech plot twists).

When we tweeted #JusticeForHan, all we wanted was to know why Deckard was invited to the barbecue. We didn’t need Han to become Batman. The idiom of a monkey’s paw has a new name, and it’s F9.

F9 isn’t simply bad because it epitomizes everything wrong with overproduced tentpoles. Its failures sting more because it had all the makings of an incredible sequel. F9 has clear-eyed ambition, evidenced by the ever-escalating scope and worthwhile elements aplenty. Kang, the laser-focused Cena, an overdue connection to Tokyo Drift, and Dame Helen Mirren flirting with Diesel — these should have been a ticket to the Moon.

Not even Justin Lin can steer this franchise back on track.

Instead, F9 is a disastrous implosion that outright betrays fans who gravitated towards Fast & Furious for its unlikely integrity. Continuing the downward trend that started with 2017’s Fate of the Furious, a movie I truly hoped was an aberration, it proves not even Justin Lin can steer this franchise back on track.

F9 is worse than Fate. It lives up to the series’ worst stereotypes and affords buzz-killing haters with legitimate ammunition to argue this once earnest, skillfully crafted tentpole franchise really is as dumb and empty as the snobs would have you think.

After nearly a decade of bad tweets, F9 even goes to space. Weightless as the film is, perhaps it should stay there.