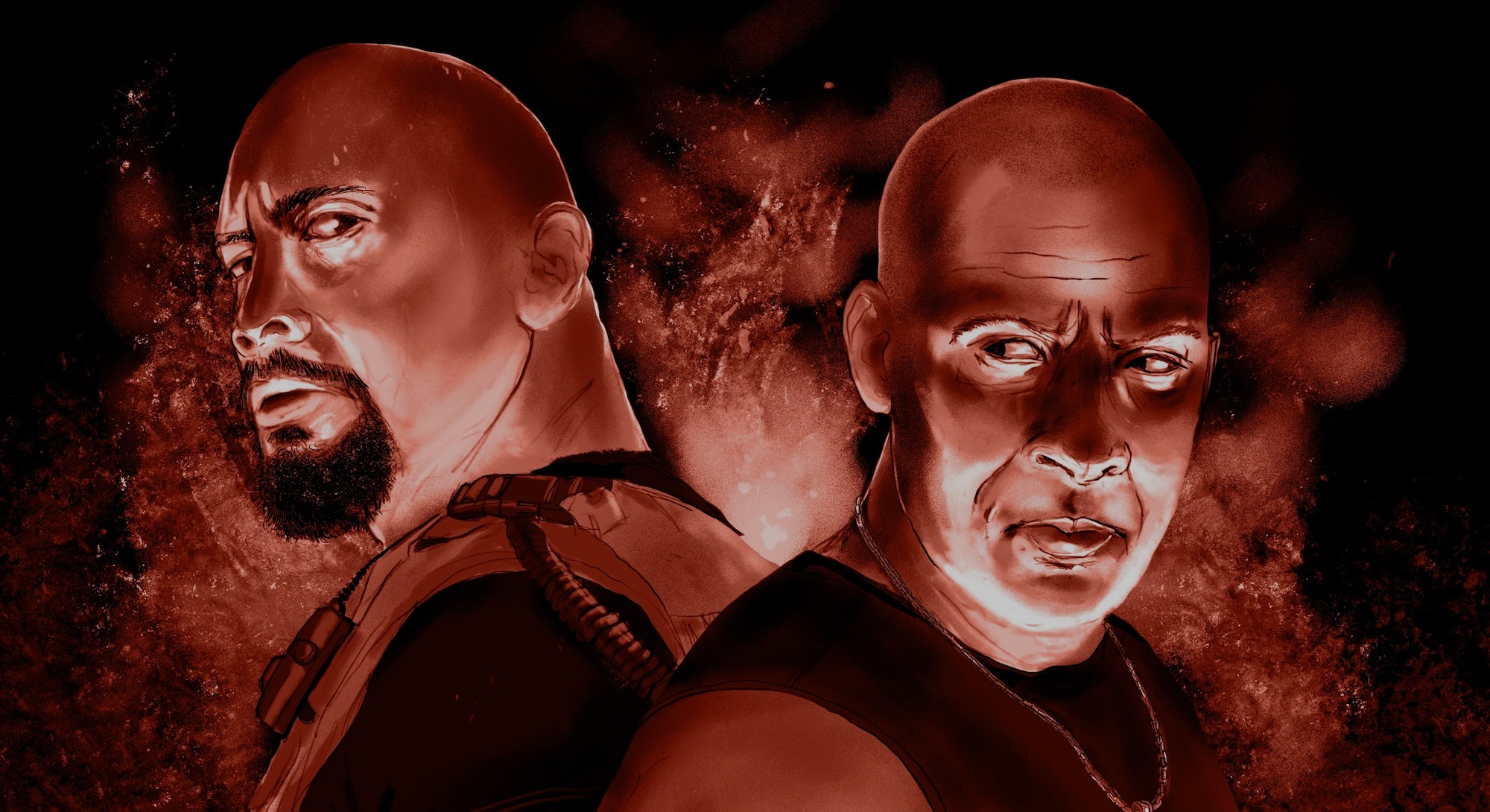 Fast & Furious didn’t become the cultural juggernaut it is today until Dwayne “The Rock” Johnson showed up.

Even in the production notes, director Justin Lin calls Johnson’s decision to play FBI agent Luke Hobbs in Fast Five, the appropriately titled and franchise-defining fifth film in the Fast & Furious saga, a clear sign that these movies were “going in the right direction.” Fast Five co-star Chris “Ludacris” Bridges puts it another way: “There hasn’t been anything this big since King Kong vs. Godzilla. Period.”

Beyond Vin Diesel and Dwayne Johnson’s onscreen collision evoking monster-movie hype levels, there are many reasons why Fast Five rose above its predecessors — as well as pretty much every other Hollywood blockbuster that came before it.

“Bringing them all together was a real stroke of genius.”

“We did The Avengers a year before The Avengers came out,” co-editor Fred Raskin tells Inverse. “Taking all of the characters from all of the movies that had preceded it and bringing them all together was a real stroke of genius.”

It helped that Lin and writer Chris Morgan had been fully encouraged to move beyond cars and street racing. Their tantalizing goal for Fast Five was to combine Ocean’s Eleven with The Fugitive. Stunt coordinator Spiro Razatos says they also took a gamble by giving the film a “heart” that helped to “expand the story,” which made it appeal to a much wider audience.

This also gave viewers the chance to “really fall in love with all the characters,” co-editor Kelly Matsumoto says. The dynamic between the crew — or “the family,” as they’re lovingly known — proved to be so electric that scenes where they just hang out in the hideaway were as integral as the explosions, cars, and epic set pieces.

“They make you invest in the action,” Matsumoto says. “Those are the sequences that give the movies personality.”

Of course, any Fast & Furious film is primarily judged by its action. With Fast Five, Lin wanted to go back to the “roots of the first Fast film,” says Razatos, “by doing dirty and real stunts.”

Welcome to The Rock

Vin Diesel had wanted the wrestler-turned-actor to join the Fast and Furious “family” for years, but things changed after he posted a picture of the duo courtside at a Lakers game to Facebook on April 1, 2010. As expected, it was met with a ravenous response and frenzied speculation from Fast & Furious fans.

At a time when social media was still in its infancy — especially when it came to studios using it to communicate with cinemagoers — Diesel saw Johnson’s involvement as a way to turn Fast & Furious into the billion-dollar franchise he had always envisioned. Lucky for Diesel, after the likes of Race To Witch Mountain, Planet 51, Tooth Fairy, and Faster had failed to thrive at the box office, Johnson was in need of a career boost.

It worked. Fast Five hit theaters like a rocket, becoming the highest-grossing installment of the series yet, and earning the best reviews, too. Ten years later, it seems obvious putting Diesel and Johnson together would be a win-win for everyone involved, but at the time, Fast Five was as risky as stealing an entire bank vault and attaching it to the back of your getaway car (something which definitely happens in that movie).

After Fast Five, Johnson exploded, becoming the biggest action star in the world. All 10 Fast & Furious films now have a combined gross of over $5.8 billion, making it the most successful franchise in Universal history. There’s an animated Netflix show, various video games, toys, and it’s a key attraction at Universal Studios Hollywood.

But back in 2011, the Fast & Furious franchise was far from the cultural phenomenon it would soon become. While profitable, both 2 Fast 2 Furious and The Fast and the Furious: Tokyo Drift failed to build off 2001’s The Fast and The Furious. This was hardly a shock when you consider that only Paul Walker had returned from the original.

The idea of a continuous story with a core cast exploded in 2009’s Fast & Furious, where Walker, Diesel, Michelle Rodriguez, and Jordana Brewster all joined forces again for a fourth film. Fans came out in droves to see it, and its $363 million worldwide gross was over $125 million more than its closest rival from the series.

Universal soon greenlit Fast Five, increasing its budget from $85 million to $125 million. The studio was particularly confident in its profitability because of the DVD sales of the previous movies. These were so huge that Universal anticipated a box set containing all five movies would be extremely lucrative. Smart move; much like the franchise itself, it only makes sense to go big while going home.

The cast and crew of Fast Five’s only ambition was to make the best movie possible. The task became much easier once Johnson signed up as Hobbs, the federal agent who chases Dom, Mia, and Brian to Rio de Janeiro, where they’re doing one final job to gain their freedom.

At the same time, Lin had to fight to make sure the action sequences were done practically. After many discussions, Universal finally bowed to Lin’s demand, even though it would have been much easier to make Fast Five with visual effects.

“The audience is way smarter than people give them credit for.”

“If we’d done that, it’d have been just like Fast Four. It wouldn’t have had the same impact,” says Razatos, who honed his craft doing “high octane and real action” on low-budget $1 million movies like Double Revenge, Hit List, Cage, and Waxwork II: Lost In Time, to name but a few.

“On those movies, you had to do it real,” he says. “You had no help. You didn't have rehearsals like we do. You didn't have all this equipment that you can have at your disposal. But we had to keep it safe. So we had to come up with a lot of ways of how to do it and how to make it look real. We all have our things that we do better than others. Mine is doing things practically.”

Lin’s and Razatos’ approaches aligned perfectly. The director was in awe of how Razatos allowed him to get the camera an inch away from the action. “Getting the camera so close makes the audience feel like they're right in the action. [Especially] when it’s not CG. Because the audience is way smarter than people give them credit for. You're not fooling the audience,” adds Razatos.

Even Fast Five’s much-lauded final set piece, which sees Dom and Brian dragging a huge bank vault through the streets of Rio, was shot practically.

“I would say 15 seconds of that 12-to-15-minute-long bit are CG,” says Razatos, who would prepare for these scenes by simulating them with dozens of toy cars. The trick for the finale was to control the different vaults by either driving, towing, or putting them in front of a semi-trailer truck. The only thing they didn’t have any direction over was where the cars would go after they were hit.

All the while, Lin would ask Razatos why the characters would turn in a certain direction or make this driving decision so that he could keep on top of their motivations and emotions during this relentless set piece.

“Everything had a reason, just like in the story when you wonder why someone is sitting down and not standing,” Razatos says. “Are they nervous? Are they stressed? I like the way he did that with the action.”

While Razatos was busy working on the action sequences in Puerto Rico, Alexander Witt was hired as the second unit director for the car heist on the train towards the beginning of Fast Five. Lin wanted this to be reminiscent of the opening scenes of many James Bond movies, and over the course of three weeks, in the baking summer sun of Arizona, Witt more than delivered, even though he had some rather peculiar hurdles to overcome.

“There were turtles in the field that hadn’t been seen in the last 10 years,” says Witt. “They know they’re there, though. So we had a limit on each side of the train track of around 200 feet. It was so strange. We had a guy watching us there like a hawk.”

“There were turtles in the field that hadn’t been seen in the last 10 years.”

It didn’t help that filming equipment arrived several days late while they could “only work” on the scene “until the early afternoon because of the way the sun would hit the train.”

Like Razatos, Witt, who was under serious consideration to direct Tokyo Drift before Lin was hired, learned to embrace the chaos, even when the train was almost derailed by a colliding truck.

“The idea was that the truck was going to stay there right on the train,” Witt says. “But we almost derailed the rear rail. If you see the film, the wheels of the train came off. If it had been a few more inches then the whole train would have been on its side. I thought we’d have to do it again because it didn't work the way that it was supposed to work. When I called Justin and the producer and explained what had happened, they said, ‘Send over the videos.’ They loved it.”

When Raskin and Matsumoto started putting Fast Five together alongside their other editor, Christian Wagner, it didn’t take long for them to notice how special it was.

“I got really excited. It just seemed really different and really good,” says Raskin, “but I didn’t fully realize what we had until we screened the movie as a whole. Me and Kelly just looked at each other and said, ‘This movie is great.’”

Universal was so impressed it gave Lin more money for an additional week of shooting, which he used for the opening bus sequence where Brian and Mia are able to flip the vehicle and save Dom from prison. Rather than overseeing it himself, Lin put Razatos in charge of filming.

“He called me and said, ‘I want you to do this. You can do it so much quicker and so much more efficient.’ He could then concentrate on the other stuff he wanted to add and not have that extra stress.”

The studio also allowed the film to have a 2 hour and 10 minute running time, despite previously insisting it be under 120 minutes to allow more screenings in theaters per day. This trust was rewarded when Fast Five easily became the most successful film of the series yet, grossing $626.1 million across the globe.

It also scored 77% on Rotten Tomatoes, dwarfing the totals of the other Fast And Furious films and immediately legitimizing the series in the eyes of the critics. The four subsequent entries to the franchise, including Hobbs & Shaw, have at least hit 67%, with only Furious 7’s 82% beating Fast Five’s total.

“You never know with critics,” says Matsumoto. “But all of the elements really came together.”

The warm reception was all the more important because of Fast Five’s depiction of a multicultural family from East LA taking part in action and adventures that are usually reserved for characters like James Bond and Danny Ocean, and actors who look like George Clooney and Harrison Ford.

“You have this diverse cast,” adds Matsumoto. “And they’re not behaving in the typical, you know, stereotype. It wasn’t a token thing. It wasn’t done because of the moment we're having. It was instinctive. We wanted to see other races, people, and diversity on screen. Nobody was really doing that. It was really groundbreaking.”

And of course, adding the Rock didn’t hurt, either.