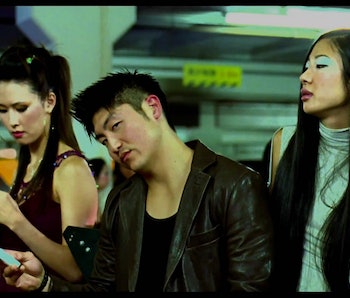 Have you been to a movie theater anytime recently? Bemused and despondent about the best film in multiplexes this summer was The Shallows? Maybe it’s time to save your money and actually watch some movies on that Netflix subscription your friend’s friend’s mom pays for every month. Good news: first new non-Netflix-Studios addition that’s really worth watching, in some time, has just hit the streaming service: the incomparable third iteration of the Fast and the Furious franchise, Tokyo Drift.

In a way, 2006’s Tokyo Drift (which turns ten years old this year) suggested a direction for the franchise that was never ready followed up upon in earnest: a wild detour to another location, focused on a discrete side story, with only minimal tie-ins to the first two films. Eventually, Fast and the Furious would embrace its mythology and the films would become winding, ensemble-cast epics; the chronology laid out across the 10-film franchise (including the Turbo-Charged Prelude and Los Bandoleros) places the events of Tokyo Drift eighth in their chronology.

The good thing about Tokyo Drift was that at that point in the Fast and the Furious history, no one gave a shit about chronology. With its incredible and wonderfully invasive Terikayi-Boyz-and-Pharrell-punctuated soundtrack, Tokyo Drift was over-the-top fun with a dynamic cast of mostly Japanese actors and hilarious cipher Sean Boswell (Lucas Black) in the drag-racing hot seat, it’s perhaps the most outright fun in the F&F series.

Sadly, it was also the least successful chapter at the American box office, perhaps because of its lack of star power and lukewarm reviews, though it killed in other countries (its soundtrack reached the Top Ten of the Austrian music charts). Later, Fast and the Furious movies also capitalized off of Drift’s cult following, reviving troubled but ever-suave sideman Han Seoul-Oh (played by Sung Kang) — the film’s Mercutio, essentially — for three movies.

Takashi — also known as DK San (“DK” standing, of course, for “Drift King”) — is one of the series’ most distinctive adversaries, and the one with the most enviable trademark skills: the power of the eponymous drift, rendered in elegant, hair-raising slow-motion on the precipice of gorgeous Japanese cliffs.

Tokyo Drift was also then-indie-famous-director Justin Lin’s commercial breakthrough. He took the franchise toward the heights of hundreds-of-millions-grossing success it enjoys today — as Universal Studio’s most successful franchise — by directing the fourth, fifth, and sixth films.

The expense of its unique, exotic ambitions, however — the mark of a young director trying to create a distinctive universe within a series — would end up changing the series’s direction, perhaps for the less-interesting. Its comparatively paltry returns necessitated that Vin Diesel returned as the series’s main character in the next film. So he has remained for the Fast and the Furious movies of the past ten years.

Had it remained more of a batshit anthology series, who knows what the average Fast and the Furious movie would look like today. Probably it wouldn’t have made it to today to an incredibly unlikely run of eight full-length films — but it might be less by-the-numbers.