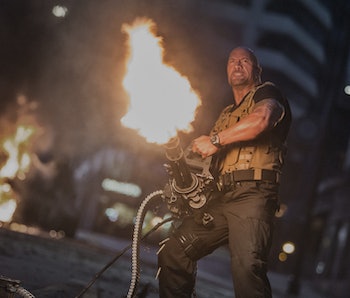 When it comes to big blockbuster franchises, there’s no series more emblematic of the new craze than The Fast & The Furious franchise. The size and scale we’ve come to expect from these summer tentpole films is unrivaled. A central panel of the rich tapestry of American cinema for over 15 years, Fast & Furious keeps alive two of the fundamental elements of the tradition of cinema: spectacle and delight. In its impossible stunts, big explosions, insane chase sequences and dynamic characters, Fast & Furious isn’t just brainless entertainment, but delivers on the promises of early cinema over a century later.

The Fast & The Furious is available on Netflix on Monday, so as you prepare to revisit it, let’s talk about why it’s a clear torch-carrier for the legacy of cinema.

Cinema has always been about spectacle. Since the early days of film, we’ve been using cameras to make our worlds bigger, weirder, crazier, and stranger than anything we might experience within the confines of our everyday lives. We’ve gone to space, made heroes, fought bad guys, and done a lot of dancing, driving and destroying. From A Trip to the Moon to Raiders of the Lost Ark and from Top Hat to Star Wars, film’s entire raison de être is allowing us to explore and understand the world around us through fantastic, larger-than-life stories.

We’ve come a long way since the days of Méliès and Muybridge, adding synched sound, dialogue, color, sophisticated special effects and stunning cinematography to film’s offerings. Today, there’s as much room for quiet, contemplative films as there is for bombastic blockbusters like Fast & Furious, and that’s a beautiful thing.

In film, we’re only limited by our own ability to imagine, and to write off Fast & Furious films as brainless, mind-numbing entertainment is to miss the point entirely. While the narratives in Fast & Furious aren’t exactly lauded for their complexity and nuance, that’s the point. They’re not films that are devoid of story and meaning, but they never set out to be the Memento of action blockbusters, either. There are twists and there’s room for character development, but the Fast & Furious films have mastered the art of relying largely on visual language to give us spectacle with a story that is simple, universal and easy to follow. In that way, they’re very much the spiritual successors to the early films that became the cornerstones of cinema.

Like Fast & Furious, A Trip to the Moon is a story that’s simple and vivid and foregrounds image. In its case, though, relying on visual language was borne of necessity. It was 1902, and talking films wouldn’t come to pass for another couple of decades, so the challenge was to execute clear, compelling visual storytelling while giving audiences a spectacle that would blow them away (which, it must be said, was markedly easier in 1902 than it is today).

Even though Fast & Furious has dialogue and a lot of sound, it is a deeply visual story. Many of the most important moments in the films don’t come in dialogue, but in action sequences, whether they’re fight scenes in a prison or on a runway that’s apparently a few dozen miles long. Visual language is paramount in Fast & Furious films, even with the luxury of dialogue. Storytelling happens in the action sequences — they aren’t all just gratuitous excuses for explosions and stunts.

Beyond the legacy of visual storytelling, though, is the purpose of Fast & Furious films. There are plenty of films whose intent and function are up for debate, but it’s abundantly clear that the mission of Fast & Furious films is to deliver fun and a good time. They’re about as close as you can get to a thrill ride in a theater, and in that way, they’re almost exactly like those very first films created over 100 years ago.

Back then, shots of speeding trains, tricks of light, clever cuts, and sets that treated the frame of a camera like a stage all came together to create films that were meant to make audiences gasp and cheer. These films were meant to be fun and to thrill those who came to witness this very new technology. The stories were simple and packed with moments of delight and surprise.

We see the same thing in Fast & Furious films — we go to enjoy the fast cars, the explosions, the moments where Hobbs flexes and breaks out of his cast. Like theater-goers during the times of early cinema, we dont go to Fast & Furious films with the expectation of being intellectually challenged. We go to be entertained, to witness a spectacle, to watch a story unfold in a way that foregrounds visual language, to be delighted and surprised and shown something incredible and impossible. We go because we know that at its core, these films are about family, fast cars, and the fierce loyalty that comes with “Ride or Die.”

Sure, Fast & Furious films have the luxury of cutting edge special effects, incredible stunt units, and massive budgets, but in many ways, they’re a lot like the films that led to one of the most affecting and pervasive forms of media that we consume today. They’re a long way from the simple, silent films of yore, but they share the same DNA, and there’s hardly a better example of the lasting legacy of early film than the Fast & Furious movies.